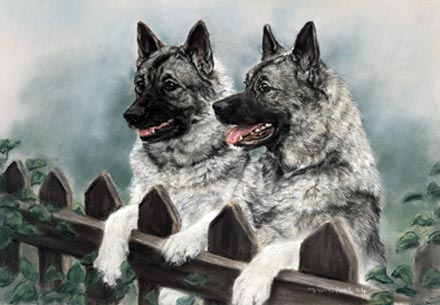 Other than “gorgeous,” the Norwegian Elkhound answers to different names throughout the world, but the aforementioned moniker – Elkhound – is actually a mistake. More accurately, it was a poor translation of the name “Elghound” which actually means “Elk-Dog.” Some may sniff at what they may regard a trivial mistake, but in the dog world, there has long been controversy over whether the breed is a “hound” in the strictest sense of the world. Not only that, but the breed wasn’t traditionally used to hunt elk, but moose. Its Norwegian name, Norsk Elghund Grå, in fact, means “Norwegian Moose Dog Grey.” Over time, “Elghund” morphed into “elkhound,” English speakers deferring to sound rather than meaning. By comparison, the Norsk Elghund Svart, a black dog of a similar but distinct breed, is known as the Black Norwegian Elkhound in English.

Image: “Over the Garden Gate” by Joy Glasspool is available as a very limited edition print here and at this website: joyglasspool.herokuapp.com

2 thoughts on “Not a Hound and Didn’t Hunt Elk”