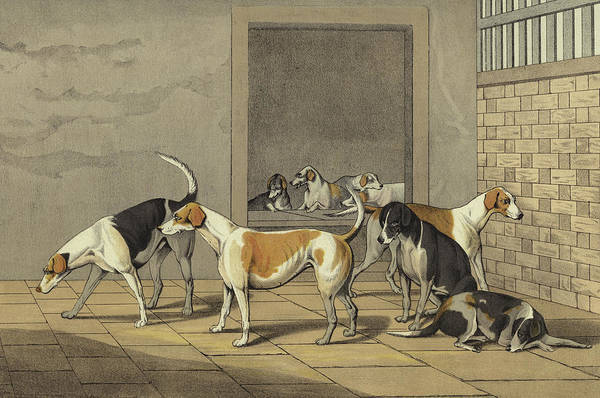 Back in the day, Hutchinson’s Popular and Illustrated Encyclopedia published by Walter Hutchinson was a “go-to” reference for all things dog. It had begun earlier in the 1930s as a weekly publication, and eventually, there were fifty-six parts which were bound into three volumes and sold as a set of three in 1935.

A section we did not see but read about had to do with English Foxhounds. Evidently, the encyclopedia described the breed as having the following varieties: ‘The White [Foxhound] was used mostly for stag hunting. The Fallow – was used for hunting all sorts of quarry, principally the stag (ed. note: It’s possible this hound was named for the European fallow deer,  known more commonly as the fallow deer, a popular quarry for the now extinct Buckhound, as well). The Dunn – the commonest breed, and would hunt any game. The Black or St. Hubert- forbearer of the Bloodhound and Southern Hound.”

The encyclopedia is widely available on the Internet, and shoppers are advised to do their homework because we saw prices range between a few hundred dollars to as low as thirty dollars. Conditions of the book varies, of course, but it seems like a nice addition to a dog lover’s library.

As an aside, back in 2008, these hounds missed the memo about hunting deer.