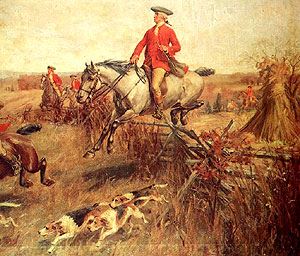 George Washington was an educated man and keen dog owner who grasped the basics of breeding. With diligence, he built up a pack of hunting hounds that became his hobby and his passion. He kept accounts of his breeding program in journals, and filled the pages with details of the foxhounds he came to call “Virginia Hounds” (over 30 hounds are listed in Washington’s journals). Perhaps we’re reading too much into it, but we think the names he gave his dogs reveal an owner who studied his dogs’ personalities: Names such as Venus, Drunkard, Sweet Lips, Truelove, Taster, Vulcan, and Tippler.

Sweet Lips was a particular favorite of Washington’s, and it was she whom he kept for company when he stayed in Philadelphia. After the war, Washington fulfilled his dream of returning to Mount Vernon to continue his agricultural work and breeding program. He had come to determine that his Virginia Hounds were too slight and not strong enough to a endure the sustained hunt in the east coast terrain of America. He also felt they were too easily distracted from pursuing the trail of a fox. Washington asked his friend, the Marquis de LaFayette, if he could obtain a few of the French King’s staghounds – no easy thing – but Lafayette managed to acquire seven large French hounds that he sent to Washington.

Washington bred the dogs to his Virginia Hounds with an eye to increase the size, speed, and stamina of his own dogs. His efforts paid off, and Washington is credited as being the main developer of the American Foxhound.

Image of George Washington on a hunt found on Pinterest and happily credited upon receipt of information.