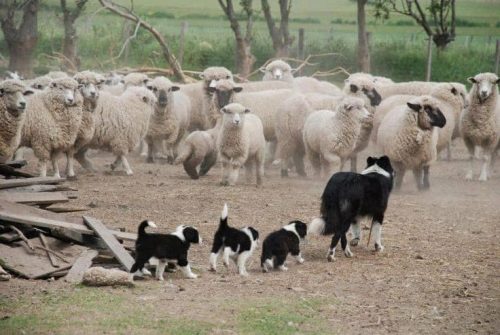 Shepherds, farmers, and ranchers will tell you that puppies learn by watching the behaviors of experienced dogs. By observing, they gather useful information and helpful “data” when there seems to be an advantage in mimicking that behavior. This is why shepherds, for example, will allow puppies to watch their parent working sheep.

This type of learning is called allelomimetic behavior, observational learning, or social learning, and it capitalizes on a dog’s inborn predisposition to want to be with other dogs, follow their lead, and do the same things.

When Anna Scandurra in the Department of Biology at the University of Naples and her team did research on the issue, they worked with 50 Labrador Retrievers who lived at home with their owners, none of whom were professional handlers or trainers. The team wondered if an untrained dog could learn a new obedience command after seeing it demonstrated by a dog who already knew the command. There are more details to such a study, of course, but the conclusion is that of the dogs who observed a demonstrator dog, 62.5% performed the task correctly in the test phase, as compared to only 23.5% of the dogs who did not get to observe the demonstration. “In conclusion our results suggest that observational learning could be useful in dog training.” Their findings were accepted for publication by the journal Applied Animal Behaviour Science.

Not everyone, however, agrees that dogs can learn simply by watching. It’s been pointed out that four conditions are necessary for observational learning:  Attention, retention, motivation, and production. A pup has to pay attention to the dog performing the modeled behavior; She has to retain the information gathered about the behavior while watching, she has to be motivated to reproduce the behavior in a time and place different from the original time she saw it, and she has to reproduce the behavior.

That being said, evidence suggests to us that ranchers and shepherds know what they’re doing. An earlier study from 1997 conducted by Slabbert and Rasa found that pups between the ages of 9-12 weeks who were permitted to watch their narcotics-detecting mums at work proved to be more capable at learning the same skills at six months of age than control puppies the same age who weren’t previously allowed to watch their mothers working.

By now, the experienced dog owners among you will be thinking that it’s just as easy to pick up undesirable behaviors from watching a “naughty” dog in action as it is the behaviors we actually want, and you’d be right.  A word from the wise, then: Be careful what your puppy observes in other dogs!

Image: This photo has appeared all over the Internet unattributed, and we’d love to give proper credit. Anyone?