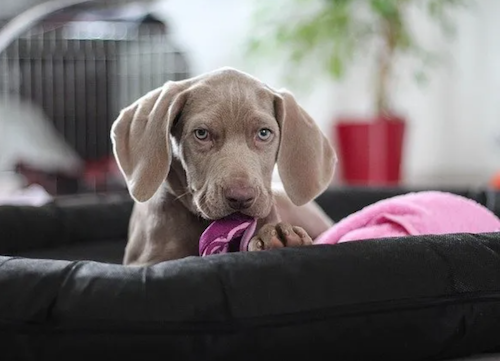 The fabulous Weimaraner is an interesting breed! In addition to the light patch of hair found on the heads of some Weims (something called the Grafmar’s Cap), and tiny little horns called “szary” in Hungarian, some Weimaraner owners notice a behavior in their dogs that’s been dubbed “nooking.”

Nooking is a behavior (some say it’s a Weimaraner-specific character trait) in which a dog, both puppy and adult, kneads and sucks on their bedding and stuffed toys.  We have come across so many explanations for nooking that we’re hesitant to explain it at all. Some says it’s a trait caused by early separation from the mother, and some maintain that it’s a sign of boredom or anxiety. Still others say it’s nothing more than a quirky comfort trait that seems to run in some lines. We always defer to the experts, breeders and owners, to share their opinions and experiences about this.

We came across a video of nooking in action: