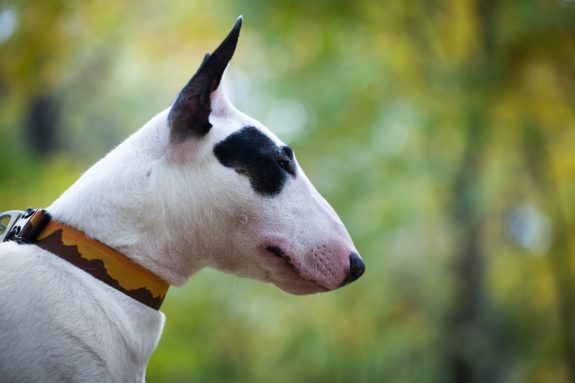 The now extinct White English Terrier, some say, was one of the first, if not the first, terrier breed developed primarily for appearances and the show ring, and not to be a working dog. The debate may go long into the future as to whether it was bred exclusively from white terriers, or was the result of a cross between terriers and other breeds, but insofar as its future, it’s uncontested that it factored in the ancestry of the Bull Terrier.

The Bull Terrier as we know it today is credited to the son of an Irish shoemaker, James Hinks.  James dabbled in a number of endeavors on his way to becoming the “Master Craftsman” of a breed: He ran an ale house at 53 Worcester Street; he was a poultry dealer, but he also bred rabbits, mice, and birds. He did a bit of time in jail, but we’re not sure if this was before or after he married Elizabeth Moore. They had eight children, and eventually, James’ interest turned to breeding dogs.  His vision was to create a “Gentleman’s Companion.”

History doesn’t specify with certainty which breeds James used to create his ideal dog, but Henry Walsh, the best known cynologist of the time, wrote that it was very likely the Old English Bulldog and English White Terrier, with perhaps a dash of Greyhound.  James also added the Dalmatian, and that some of today’s white Bull Terriers can sport a black spot on their head may be a reflection of those additions to the ancestry.  There is no disqualification pertaining to coat or skin color in the white Bull Terrier, though per the AKC standard, markings elsewhere on the coat are to be severely faulted.

One thought on “How the Bull Terrier Got His Spot”