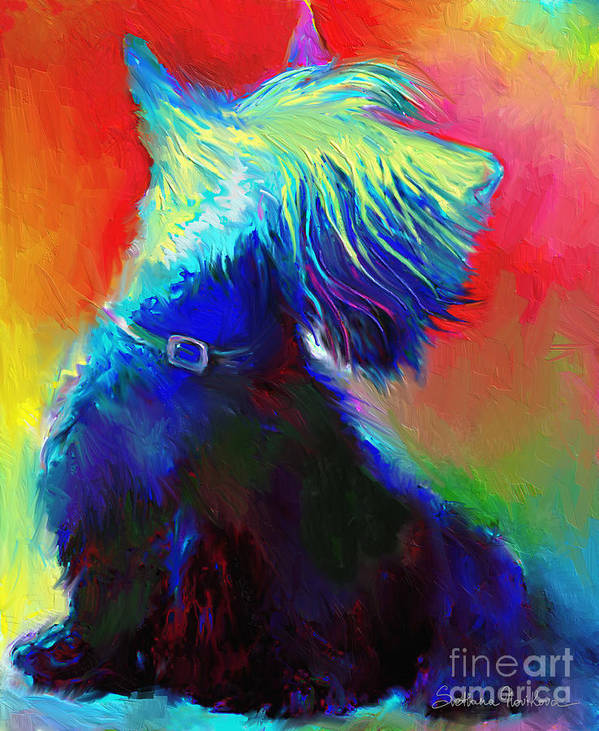 It showed up at the beginning of the eighteenth century and had as its patron Dr. Van Best who bred his dog – the foundation sire of the breed – with local bitches. Resulting pups were shorter in leg and longer in body than the Scottie, though both had the pluck associated with a vermin hunting terrier. Overall, it seems to have been a rougher dog which we interpret to mean that it was less refined than the Scottie.

Still, it had its fans who wanted to see it officially recognized. They showed the Aberdeen for the first time in 1877 (the same year as the Scottie), but as John T. Marvin described it, it wasn’t a success. Aberdeens failed to gain traction as evidenced by the failure to get continued classes at shows in their name, and the dogs ended up being exhibited as “Hard-coated Scotch Terriers.” Affectionados continued their efforts into the 1880s, but in time, the breed name faded way as the Scottie ascended into popularity. This, according to Desmond Morris, delighted Scottie fanciers who’d seen the Aberdeen as nothing more than a mutt. He adds, however, that there is little evidence to back up the disparaging remarks said to be attributed to local Scottie fanciers. An additional passage he adds is worth sharing: The remarks “smack of the breed bigotry that was common in the terrier world at the time when competing groups were trying to establish fixed breeding lines from the many unidentified and highly variable working terriers of the British Isles…”

No doubt that the breed’s demise was a blow to the Aberdeen’s fans who liked its rough-and-tumble ways, a game terrier ready for anything – but that’s assuming that the Aberdeen really was a separate breed. In Vero Shaw’s book, “The Classic Encyclopedia of the Dog,” he mentions that many judges regarded the Aberdeen as a sub-variety of the Scottie, and expresses the personal opinion that the Aberdeen and the Scottie were the same dog, and any differences between the two were simply different lines producing different type.

We leave the debate to terrier folk, but leave you with a quote by William Haynes: “All dogs are good; any terrier is better; a Scottish Terrier is the best.”