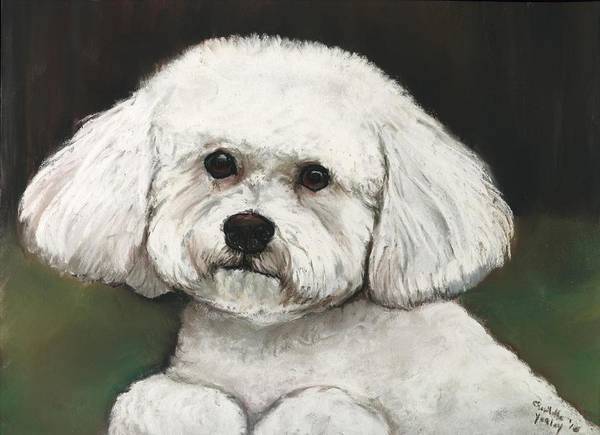 The first litter of Bichon Frise puppies born in the United States happened in 1956 after Helene and Francois Picault immigrated to this country, and their second Bichon, a bitch named Etoile de Steren Vor, went into whelp. By that time, the breed’s name was established, but it wasn’t always so.  Only twenty-three years earlier, the breed was known by two names, Tenerife and Bichon,  Tenerife being a nod to the largest of the Canary Islands, Tenerife, where much of the modern development of the breed occurred. The “bichon” part of the name is a bit trickier. “Bichon” is thought to be a contraction of “barbichon,” the diminutive form of “barbet” which comes from the French word for “beard.” “Frise” is also French for “curly.” Additionally, there is historically anecdotal evidence that pampering a Bichon Frise became such a fad in France during the time of King Henry III that it begat the French verb, “bichonner,” meaning to make beautiful, or to pamper.

Think that settles it?

In the end, it was the President of the International Canine Federation, Mme. Nizet de Lemma, who proposed the breed’s name based on breed characteristics, and the name, Bichon a Polio Frise (Bichon with the curly coat) was adopted. The anglicized version is Bichon Frise, or curly lap dog.