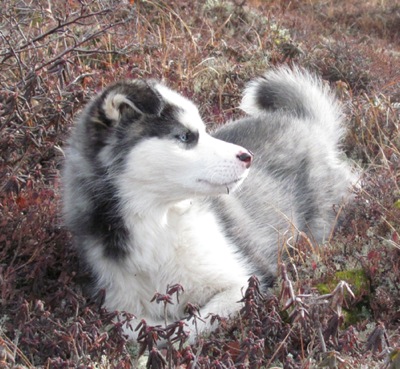 Our neighbors to the North are a dog loving nation. In 2016, approximately 41 per cent of Canadian households included at least one dog, and it was estimated that 7.6 million dogs lived in the country at that time.

There doesn’t appear to be consensus on-line about all the breeds that are native to Canada, however. One source claims that native Canadian breeds are the Tahltan bear dog (possibly extinct), the Canadian Inuit dog (also known as the Canadian Eskimo Dog), the Nova Scotia Duck-Tolling Retriever, the Newfoundland dog and the Labrador Retriever.

Another site agrees with the Canadian Eskimo Dog, Labrador Retriever, Newfoundland, and Nova Scotia Duck-Tolling Retriever, but ads the Landseer, and the Labrador Husky. A third source throws in the Hare Indian Dog and the Wooly Salish Dog, also both thought to be extinct.

What is known for certain is that these dogs were developed from other Northern breeds after arriving with the Thule people in a region of northern Canada during the 1300s (hence its name, “Labrador”).  The Inuit people used the breed primarily for sledding. The “husky” part of its name comes from an umbrella term for dogs used to pull sleds. In fact, we came across a site that pointed out that the term, “husky,” was a corruption of of the word, “Eskie,” and that was “Esquimaux” was the French version of “Eskimo.” Present day Labrador Huskies exhibit some of the characteristics of wolves, but it is not a “wolf dog.” Alaskan Malamutes and Alsatians were most probably introduced to the breed by the Labradorian people which resulted in a larger, more wolf-like breed with a striking resemblance with the Siberian Husky.

There are others who scoff at all this and say that the dogs (which they call “Huskadors”) are commonly mistaken for a Husky-Lab mixes because they are Husky-Lab mixes.

We don’t have a proverbial “dog in the fight,” and would love to hear from our Canadian friends about the Labrador Husky.