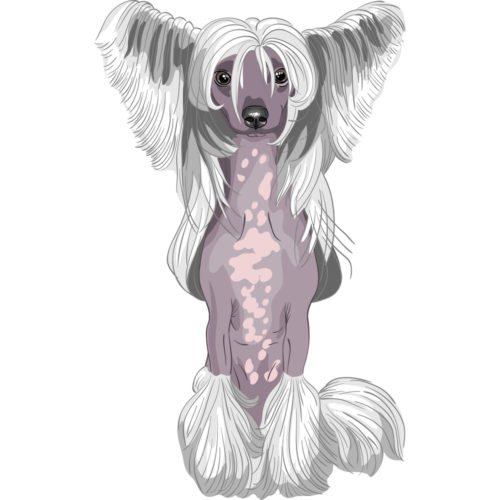 It was probably one of the earliest written descriptions of the breed: “…curiously spotted, and for the most part naked, his head only adored with an English Peruque and his tail with a single tuft at the end.”

English naturalist, Robert Plot, wrote the words in 1686 in his book, “The Natural History of Staffordshire.” The dog he described was also illustrated, and it is virtually identical to the modern Chinese Crested Hairless.

But what is a Peruque?

It should be noted that the crest on a Hairless is soft, straight, and single coated, and it can be be anything from a strip of hair from the dog’s stop to a full head of hair, complete with face furnishings and ear fringes. Hair can be left on the face and ears of the Hairless, but it can also be trimmed or shaved. That said, a Hairless with a heavy crest and equally heavy furnishings is more likely to have body hair that might be a strip down the dog’s back, or maybe on the dog’s hips or shoulders. However, this does not make the dog a Powderpuff.