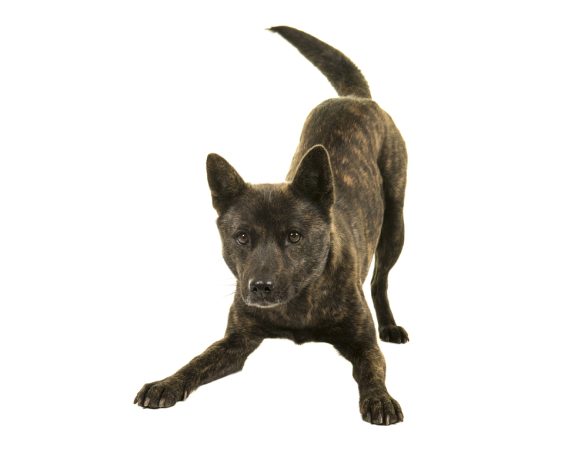 Is it human nature to want the next new shiny thing?

This seems to have been the case in Japan after World War I.  Native breeds came to be overshadowed by “exotic” imported breeds (something we’ve seen in India, as well), particularly breeds like the German Shepherd Dog and German Shorthair Pointer. To the country’s credit, however, it came to its senses in the 1930s by realizing the treasures they had in their own backyard. In that decade, serious effort was made to revive the ancient breeds and sort them into a semblance of an ordered classification.  In no small measure, this was due to cynologist and breeder, Haruo Isogai, who used size as his criteria in organizing the breeds (and to a lesser degree, their function).

Borrowing a phrase from the fairy tale, Goldilocks, the Kai Ken was “just right” because it wasn’t too large, nor was it too small.  In fact, among its many names was Kai Shika Inu, the Japanese words, “shika inu” meaning “medium sized dog.”

The Kai Dog’s job was always that of a hunter. It pursued deer,  boar and small game, and that takes us to its alternate Japanese name:  “Tora Dog” which means “Tiger Dog.”  This name signified a common coloring of the coat, a striped appearance not unlike that of the tiger. The brindle is called Aka-Tora, the red/black named Chu-Tora, and the black, Kuro-Tora.  While legend hints that the dogs were so named because they hunted tigers, breeders will say that the name implied the breed’s disposition as a strong willed and cunning hunter not disinclined to hunt independently of its master.
Image: Kai Ken/Deposit stock photo