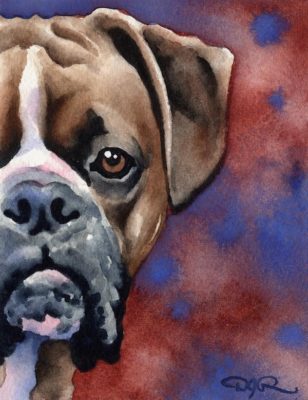 Germans were a little late to the party when it came to breeding dogs seriously and with a modicum of science to their method, but when they did it, they did it right. Exhibit A: The Boxer.

As a breed unto itself, the Boxer’s origins began in the latter part of the 19th Century making it a relatively “new” breed, but it came from a storied ancestry, a family of dog breeds sometimes known as Mastiffs, Alaunts, or Molossers. That makes the Boxer’s family tree quite ancient, perhaps as old as 7,000 years old (depending on the source).

Germans are rightfully proud of their Boxer, so it may have rankled one or two of them that the first sire of the recognized breed wasn’t German, but English. The white Bulldog’s name was, Dr Toneissen’s Tom, and his honeymoon with Alt’s Schecken in 1895 started the beginning of the modern Boxer. That said, there was nothing straightforward about subsequent breedings, and you need only read the first paragraph under the heading, The Modern Boxer in Germany, to see how much we’ve simplified this part of the breed’s history here. Suffice it to say that by late 1800s, the modern Boxer emerged to wow the world as a sleeker, more elegant dog than his immediate predecessor, the Bullenbeisser.

The Boxer was first exhibited in Munich in 1895 at a dog show intended for St. Bernards, the same year that the first Boxer club was formed in Munich by three Germans, Friedrich Robert, Elard Konig, and R. Hopner. After that, things happened quickly (in dog time, that is).

Less than ten years later, the Boxer became one of the earliest dog breeds to be recognized by the American Kennel Club when it registered the breed in 1904. There were eighteen registered Boxers in the next twenty-two years, and by 1934, seventy-one were registered, and only four years later, the number jumped to 724. In that time, the first Boxer to finish an AKC championship was Sieger Dampf v Dom. There was no keeping the fabulous Boxer a secret.

Anyone who feels that bitches are at a disadvantage in the show ring would be supported by the fact that it took nearly 20 years for a bitch to to complete an AKC championship, a feat accomplished by Ch. Dodi v.d. Stoeckersburg in 1933. The first Boxer to win the Working Group at Westminster was Ch. Dorian v Marienhof of Mazelaine who did it in 1937.

We skip over a good deal of history to come to an exclamation point, and that is that the first breed ever to win over one hundred Bests in Show was a Boxer, and you can read Bang Away’s story here.