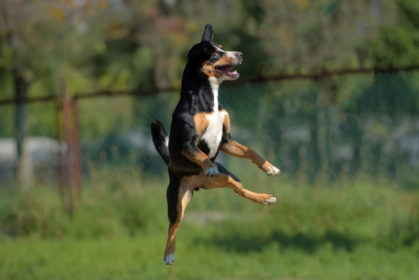 Think of Swiss exports, and you’re apt to conjure up images of amazing chocolate, fabulous cheese, and well made watches. There is one more Swiss “commodity,” and that is the Entlebucher Mountain Dog.

Vital to dairy farmers whose product was the vital ingredient in the aforementioned chocolate and cheese, the “Entle” drove dairy cows to pasture land high in the mountains during the summer, back down to the valley for the winter, and guarded the herd in between, usually in the Entlebuch region in the canton of Lucerne.

This smallest and quickest of the four Swiss Sennenhunds developed remarkable balance and agility in the course of moving cattle up and down sloping pastures, and he took his job seriously. This sober work ethic, however, is not what earned the breed its sobriquet, “Der Lachen Hunde,” or “the laughing dogs.”

The Entlebucher deserved this nickname with an agreeable nature, a wicked sense of humor, and a happy disposition. Owners described the breed’s positive outlook on life as contagious, and the dogs so delight in making their owners laugh that they often develop a repertoire of antics to make them smile. One manifestation of this joie de vie is the “Entlebucher leap,” the ability of the dog to jump many times its own height, an asset the Entle also used to slam into a stubborn cow in order to move it. Take a look!