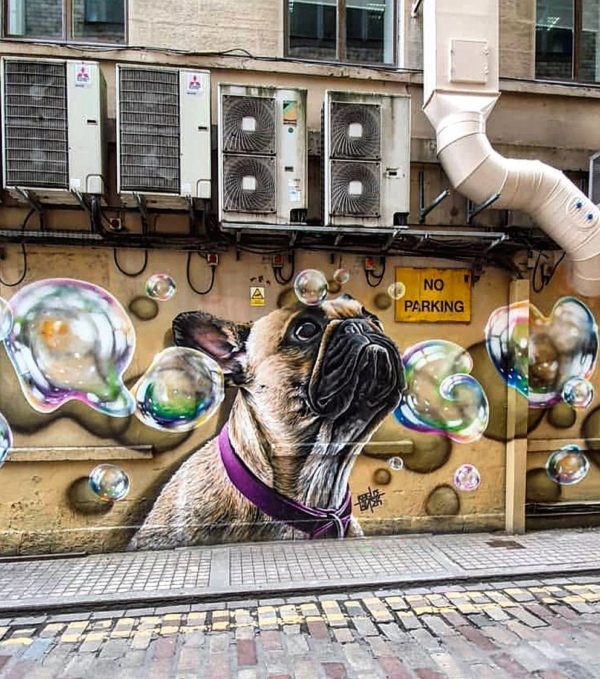 It’s hard to believe that this fabulous painting was done on a pitted, bumpy wall with spray paint, but it was!

Rogue-one, a street artist from Glasgow, Scotland, takes his pen name from Rogue Trooper, a British comedy character, but his birth certificate reads Bobby McNamara. He’s been surpassing himself for over 20 years with work that ranges from the large scale images like the one you see here, to stencils, 3D art, and traditional canvases.  In the world of European graffiti artists (and perhaps beyond), he’s regarded as one of the best, and by now, certainly one of the most famous.

We think the fame is well deserved.  Our eyes are drawn to a French Bulldog gazing at bubbles and only later do we realize how good a job it the image has done in distracting us from the unsightly ductwork, fans, and HVAC units on the backside of a building. Much of his work is done in the photorealism style, a genre also known superrealism. It’s hard enough to do such images in normal scale, but quite difficult to enlarge them onto a huge “canvas.” Rogue-one does it with fading, cutting back, and building up layers. He works on each part of an image, background first, then middle ground, and finally to the forefront.

Whatever the size, Rogue-one’s goal is to make people smile or laugh. Mission accomplished.