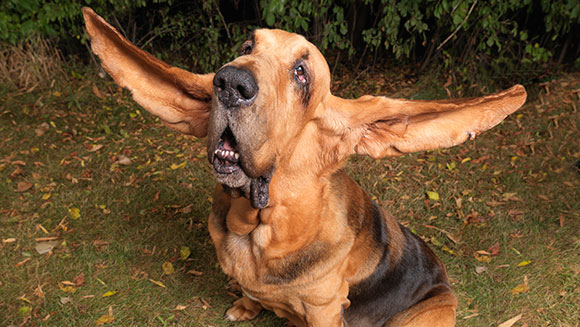 Two purebred dogs have held the most recent Guinness World Records for having the longest ears.

With 180 Best of Breed awards, and an induction into the Bloodhound ‘Hall of Fame’ in 2003, “Tigger” wasn’t done. He captured the record for having the World’s Longest Dog Ears back in 2010 with a right ear that measured 13.75 inches, and a left one that came in at 13.5 inches.  After Tigger passed away in October, 2009, the title went to “Harbor,” a Black and Tan Coonhound living in Colorado whose left ear was 12.25″ long, and the right measuring 13.5″.  As far as we know, “Harbor” (whom you can meet in the video below) still holds the record.

Lest any of us get too smug about elongated dog ears, we should remember that the cartilage in our ears and noses continues to grow until the day we die. Not only that, but our earlobes can become pendulous from gravity.  Just saying.