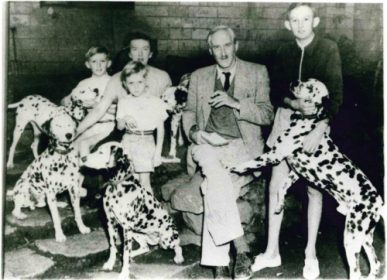 Very few people have never heard of Louis Leakey, the famed paleoanthropologist whose work expanded our knowledge of humanity’s earliest ancestors. In 1960, Louis, his wife, and their son, Jonathan made major fossil find in Homo habilis, humanity’s earliest discovered ancestor to that date. The discoveries caused a sensation by shedding light on the origins of our species. In time, Leakey would hand over excavation work in Africa to his son and wife, choosing instead to concentrate on lecturing and primatology, and mentoring Jane Goodall and Dian Fossey.

What has this got to do with purebred dogs? Plenty. The Leakeys founded the Dalmatian Club of East Africa and even won a prize in 1957.  They typically kept Dalmatians around on their digs to warn them of approaching lions, leopards, snakes and other dangers. Mary Leakey, described as the “grande dame of archaeology,” smoked cigars and drank whiskey into her 80s, and was famous for her love of the dogs.

Uncredited Photo of Leakey Family and their dogs: From left Richard Leakey, Mary Leakey, Philip Leakey, Louis Leakey, and Jonathan Leakey. Our thanks to Linda Hobbet for alerting us to their story.