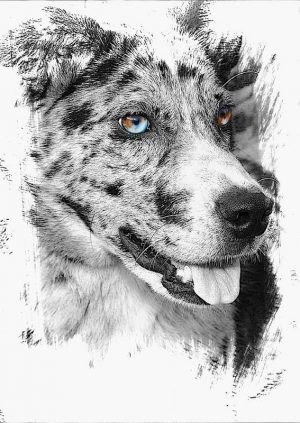 Catahoula Leopard Dogs – Louisiana’s “hog dog” – are an amalgamation of native American dogs, Spanish Mastiffs, Red Wolves and Greyhounds, but because of the breed’s name, some people assume that all Catahoulas have “leopard” markings and blue eyes. In fact, the breed is noted for its many and unusual coat colors and patterns, as well as varied eye color. When the breed finally gains full acceptance with the AKC, we honestly don’t know how its breed standard will read, in part because there have been three lines present in Catahoula bloodlines that, over the years, have frequently been crossed to create the rich color variations of Catahoulas seen today.

The Wright line is the largest, with dogs weighing around 100 pounds. Developed by Preston Wright, it’s said that this line is from dogs originally produced from Hernando de Soto’s dogs.

The Fairbanks line of Catahoulas was developed by Lovie Fairbanks are 70 pounds, and are yellow or brindle in color.

The smallest line coming in at around 55 pounds is the McMillan line developed by T.A. McMillin of Sandy Lake, Louisiana. These dogs carry a blue leopard coloring, and the unique glass eyes for which the breed is known.

The United Kennel Club was the first national dog registry to recognize the Catahoula in 1995.

“Eyes” by Joyce Baldassarre is available as a print, poster, and many more formats here.