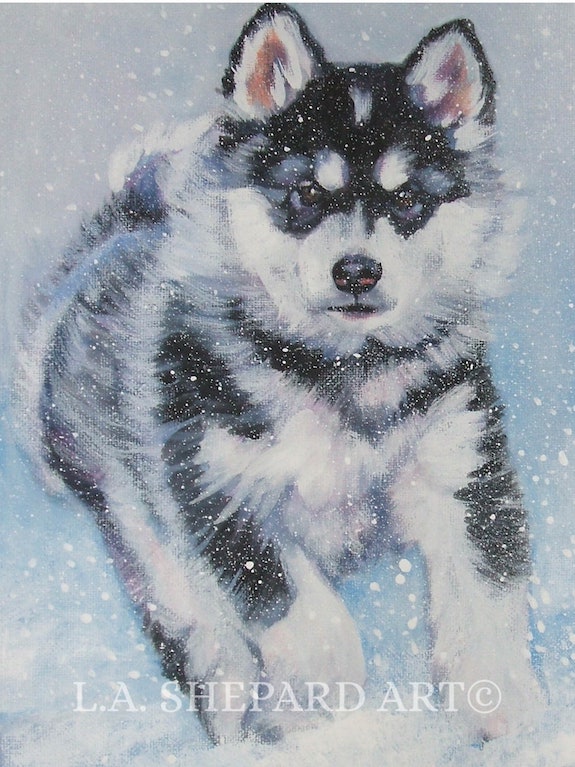 Ears are important to all dogs. How else can they ignore their owner shrieking, “DROP IT!” from across a room?

More seriously, when it comes to a nordic breed, ears really are important because if they’re not correctly “put on,” they can impact the dog’s performance. In human terms, look at it this way: Teeth aren’t connected to a runner’s feet, but a throbbing toothache during a marathon is going to impact their performance.

The ears on most arctic species are small, and while the ears of an Alaskan Malamute are described as medium, it’s important to remember that they should be small in proportion to their head. If they’re too big and/or high set, there is more surface area vulnerable to frostbite, and greater heat loss. For this reason, owners who want to mush, run, or skijor with their Malamute in the winter should be aware of ears that are tall and/or high-set, and those who want to exhibit their Malamute should know that such ears will be faulted in a show ring.

Malamute puppies are born with their ears folded over, and by the time they’re six months old, the ears are typically erect (more on that in a moment)  – and that’s when the fun begins. The Malamute has famously mobile ears that go up, go down, and rotate. Though the video clip below is shot in the dark, watch the dog’s ears for the whole 43 seconds of the video, and you’ll see what we mean:

Dogs have over a dozen muscles in their ears specifically for movement, allowing them to tilt, turn, raise and lower their ears like the dog in the video. Malamutes seem to take full advantage of every one of these muscles, perhaps more so than some other breeds, and especially when working or moving.

We don’t think of the Malamute as a breed in which ears are typically taped, but our research finds that it can be a concern to owners who want to show their dog if their pup’s ears droop and never perk up. There is no “rule” for when or how quickly a puppy’s ears go up; it can take weeks or sometimes months, but if they never seem to pop up, some folks, we’ve read, will use moleskin inside the ear to provide gentle support until cartilage firms up in the proper position (others might use tape).

The breed standard makes no mention of the ears impacting expression, but we find them to be an endearing part of Malamute breed type.