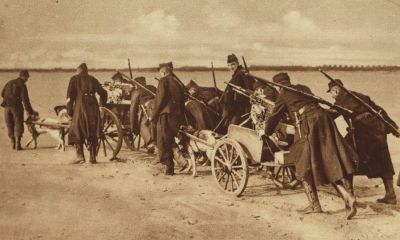 There is never a bad time to thank a serviceman or woman for their service, but it should be noted that on Memorial Day, we honor the people who died while serving their country. Some regard Memorial Day as the kick-off for summer, and there is that, but as we flip the burgers, pull a frosty one out of the cooler, and run through the sprinkler, we hope we all give a moment’s thought to those who died in the defense of our nation and our way of life.

As a dog-centric site, we think it’s also important to point out that in virtually every conflict, there was a dog nearby. Sometimes they were mascots marching alongside the drummer during the Civil War, and sometimes they were several yards ahead sniffing for IEDs. War is hell, and each era has had its own type of horror shaped by the state of munitions, communications, and location.

Walter Alden Dyer was a prolific author and journalist who joined the staff of the Springfield Union in Springfield, Massachusetts in 1901. He was one of the most famous writers of dog stories, and one of them was a novel called, “Pierrot, A Dog of Belgium.” The story published in 1915 tells of Pierrot (most likely a drafting breed), a pup who grows up to lead a contented life cheerfully pulling the family’s produce to market in Brussels with his peasant mistress. When war comes, Pierrot is taken away from the family by the Belgian army which commandeers all draft animals. Pierrot is pressed into service pulling a machine gun to the front line***, and here Dyer paints an all too vivid picture of what it must have been like:

“There was no time to unharness the dogs, so they were turned about and were obliged to stand facing away from the tumult of battle as the machine-guns began to rattle directly behind them. It was very hard to bear, and some of them might have broken and run but for a half-dozen men who had been told off to squat by the dogs’ heads and hold them steady…two of the dogs started wildly off, their gun bumping and careening behind them…

“Just as they were turning a speeding bullet caught a spotted young dog that Pierrot had become acquainted with. He was trotting close by with his mate and their gun, and with a cry of pain and terror he leaped into the air and fell at Pierrot’s feet, the red blood spurting from his shoulder.

“In terrified amazement Pierrot stopped short and sniffed at his fallen comrade. Then Conrad urged him on again while the men cut the dead dog from the traces. For the carbineers the battle was over for that day, but Pierrot had looked upon his dead and he began to understand.

“One or two of the carbineers had succeeded in getting their machine-guns into action, but they were soon overwhelmed and the dogs who were harnessed were quickly bayonetted that they might not run off with the guns. Some of the other dogs fled and perhaps a few escaped, but there was little chance for them.” 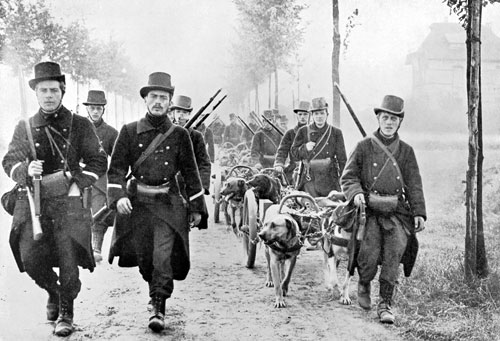 A column of belgian soldier with machine gun dogs retreating to antwerp in 1914. Alamy Stock Photo

We envision Pierrot having been a Belgian Mastiff, a breed that the Belgian Kennel Club stated may have become extinct in the 1960s, and as a result, was placed on the FCI’s suspended list.  Not everyone agreed at the time. Some researchers claimed there were still a handful of purebred Belgian Mastiffs, and it was these dogs that were used to recreate the ancient breed.  A reconstruction breeding program started in the late 1980s by G. Glineue de Boussu and Alfons Bertels recruited rural dogs believed to be descended from the original Matin Belge and crossed them with English Mastiffs, Bullmastiffs, Briards and Belgian Sheepdogs. After a decade of establishing the type and following the original standard,  many believe their efforts were successful. More massive than the original Chien de Trait, the present-day Belgian Mastiff has a large head, strong neck, and a well-boned body, with broad shoulders and a wide chest.  The recreation, however, does not have a distinguishing feature of the original breed which was a bobtail.

The Belgian Mastiff was just one of scores of breeds impacted by service in the military, and this Memorial Day, let’s remember these fallen canines, as well.

**Pierrot may have been conscripted by the Belgian military kennel “Caserne Prince Baudoin” which collected dogs from Belgian farms and bred many of them for service work.

4 thoughts on “Memorial Day: Remember the Fallen Canines, too”