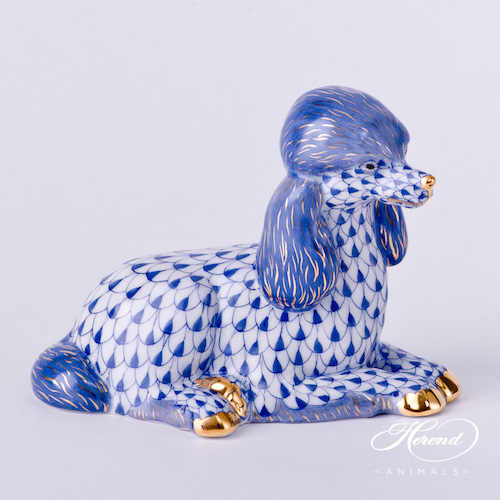 Scroll down for a little “mood music:”

Our post is about the “blue” Poodle, but for the owners of these dogs, they might as well be a tiny bit of “blue heaven.”

A “blue” Poodle isn’t blue at all, but an expressed graying (or fading) gene in the black Poodle that happens when a dog is carrying a dominant and recessive version of the silvering gene. Blues have one gene that causes them to fade slightly, whereas “Silvers” have two genes that make them lighter than a blue.

When they’re born, many “blue” Poodle puppies look to be completely black, and most are typically registered under that color. Experienced breeders, however, can tell from the onset when they have a “blue” puppy, and not just because these puppies often have white or silver hair between the pads of their little feet. Often, there is almost brown cast to the black hair on a blue Poodle that is especially noticeable in bright sunlight. With maturity, the black coat dilutes to dark blue, what some may describe as a dark gunmetal grey.  The root hairs may be a different color, something the AKC breed standard notes when it reads, “In blues, grays, silvers, browns, cafe-au- laits, apricots and creams the coat may show varying shades of the same color.”

All that said, some “blue” Poodles are actually born blue which, when compared to a black puppy (the dominant color in the breed), is more apparent.

As adults, some describe a “blue” Poodle  as “ashy” colored, too light to be black, too dark to be silver. True blue Poodles have black points and dark eyes (which is in the standard regardless of the dog’s coat color). We’ve also come across the opinions of some fanciers who feel that blues have a better coat texture than silvers which often have a “cottony” textured coat.

As an aside, “blue” is regarded as among the rarest of coat colors, but it appears in several breeds including the Staffordshire Bull Terrier,  Catahoula Leopard Dog, Italian Greyhound, Irish Wolfhound, Poodle, and of course, the Weimaraner.

4 thoughts on “My Blue Poodle*”