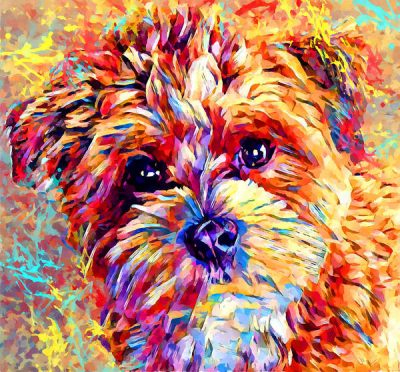 In the matter of color in the Havanese, all colors and marking patterns are permissible and of equal merit. They are truly a marvelous array of tints and shades from black to silver, and a lot in between.  In the “family” of browns, however, there is an interesting color name that doesn’t appear in the AKC breed standard, but shows up in the FCI standard, as well as in articles on the breed, and that name is “Havana Brown” or “tobacco color.”

Some registries call the color chocolate, black brindle or brown brindle. The brindle is a stripey black or brown on silver/cream that gives an adult coat an almost streaky appearance, while Havana Brown is a tobacco brown throughout, or with black, brown and auburn hairs intermixed.  Havana brown puppies are born so dark that they almost look black, though some have hints of red in the coat, a color that in other breeds might be called “seal.”

We’ve read that the process of coat maturity in dogs of this color is similar to that seen in silvers, but instead of turning charcoal or staying silver, the coat becomes different shades of tobacco brown, dusty brown, or a deep reddish off-black. The color isn’t uniform as there might be darker shading on parts of the dog, and in some dogs, adult Havana browns can appear chocolate at first glance. The difference is in pigmentation. A chocolate Havanese dog has liver pigment, while a Havana brown dog has black pigment. Since Havana/tobacco brown isn’t listed as a color option in an AKC registration form, the majority of Havana/tobacco brown Havanese are registered as black.

To our knowledge, scientists haven’t identified what causes the color with any certainty, but urban legend has. Because of political events, nearly all the old bloodlines disappeared in Cuba save the few dogs that were successfully smuggled out of Cuba and whose descendants survived in America. As the story goes, a Havanese that is havanese or tobacco brown means it originated from Havana, the capital of Cuba.

It’s been said that the color names in some breeds come from things familiar to the people who developed it, i.e., the Chesapeake Bay Retriever needing to be of a color as close to its working environment as possible: Brown, sedge, or deadgrass. It’s interesting, then, but hardly surprisingly,  that one color name for a breed originating in home of the Cuban cigar would be tobacco. Just saying.

Image: Since we lacked permission to share any photos of Havanese/Tobacco brown dogs, we torpedoed in the other direction; This print by Chris Butler is available as fine art, and in lifestyle or home decor items here.