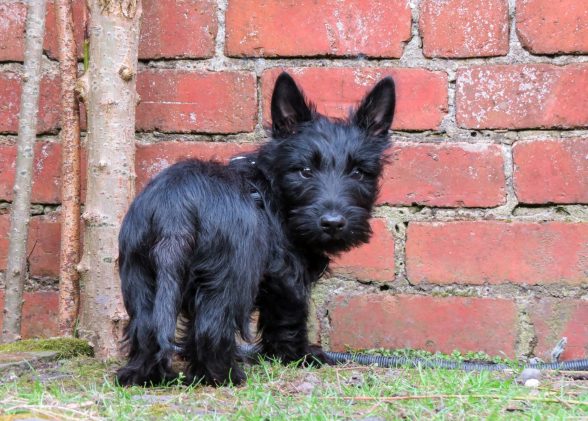 “I started back to the house, and in the drive I met Jeeves. He was at the wheel of Stiffy’s car. Beside him, looking like a Scotch elder rebuking sin, was the dog Bartholomew.”  Stiff Upper Lip, Jeeves

“A rather stiff silence ensued, during which the dog Bartholomew continued to gaze at me unwinkingly, and once more I found myself noticing–and resenting–the superior, sanctimonious expression on his face.” – The Code of the Woosters

Just who was this canine arbiter of proper behavior?

“Bartholomew” was a creation of P. G. Wodehouse, an enormously popular English writer, and one of the most widely read humorists of the 20th century. Though Wodehouse was best known for creating Jeeves, the quintessential “gentleman’s personal gentleman,” we believe that Wodehouse’s best writing was in describing Bartholomew, an Aberdeen Terrier, better known today as the Scottish Terrier.  Consider this passage from Stiff Upper Lip, Jeeves:  “Aberdeen Terriers, possibly owing to their heavy eyebrows, always seem to look at you as if they were in the pulpit of the church of a particularly strict Scottish sect, and you were a parishioner of dubious reputation sitting in the front row of the stalls.”

A frequent foil of Bartholomew is the pea-brained Bertie Wooster whose view of the Scottie can be gleaned from his description of the dog as “a canine excrescence” with a “superior sanctimonious expression on his face” which is fitted out with the jaws and teeth of a crocodile.”  In short, they were not BFFs.

Wodehouse’s vivid descriptions of Bartholomew hint at an intimacy with the breed that comes from living with it, so it might surprise readers to learn that Wodehouse’s chosen breed was not the Scottie. Still, that he had a grasp of dogs in general is evident in this quote: “”It is fatal to let any dog know that he is funny, for he immediately loses his head and starts hamming it up.”

You can get a sense of Wodehouse’s style from the following 40 minute audio version of “Episode of the dog McIntosh” read by Nick Martin, something to listen to while doing something mindless. The short story was published in The Strand Magazine as “Jeeves and the Dog McIntosh” in the UK in 1929: