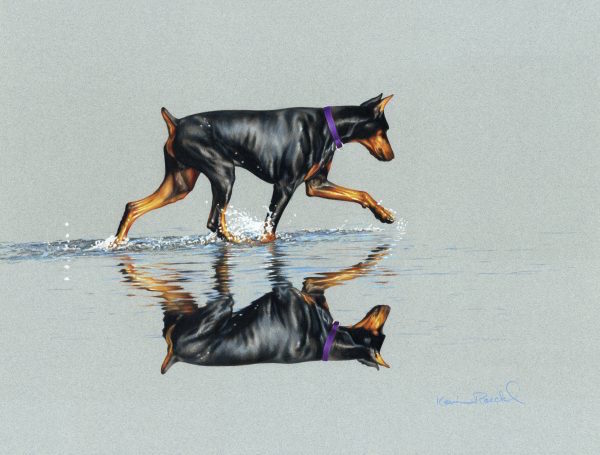 What do the Rottweiler, Great Dane, Weimaraner, German Shorthaired Pointer, Beauceron, Greyhound, Manchester Terrier, and the old black and tan German Pinscher have in common?

Louis Dobermann didn’t do the future any favors by withholding details. He never kept stud records, nor was he concerned with appearances. His goal was to develop a dog with the guts and drive to stand up to anything that dared challenge him – or, to be more precise, Louis Dobermann, himself. As a tax collector, Louis was as popular as popular in his day as an IRS agent is today.

What hasn’t changed from then until now is the price of speculation (hint: it’s free). In 1933, the German Doberman Club called upon veterans and contemporaries of Dobermann to share what they knew of Dobermann’s breeding program. Interviews included no less than Dobermann’s youngest son, Robert, and Goswin Tischer, of the “von Greenland” kennel, and the man credited with having enforced the recognition of the Doberman breed in Germany in 1895. After consulting with the aforementioned folks, the club concluded that the old German Pinscher was the main ingredient in the DNA mix.

Rod Humphries, an Australian-born author, newspaper/magazine journalist and television writer, came to a different conclusion.  His research offered a compelling argument that the Beauceron would be more of a major player than was thought. He argued that not only was its head more similar, and that the two share similar behavioral traits, but the Beauceron has identical rust markings found in the Doberman.

Philipp Gruenig, the greatest historian on the early days of the breed, and a breeder-judge in his own right, wrote what some view as the definitive book on the breed. He said, “In the blood synthesis which became the Doberman breed, the German Pinscher contributed exceedingly little more than his name.

We default to the experts, and in this case, that is the Doberman Pinscher Club of America. On its website, it writes:  “There are no records, only speculation, as to the dogs which went into the creation of the original Doberman, but it is documented that crosses were made to two of the English breeds around the turn of the century, using the Black and Tan Manchester Terrier and the black English Greyhound, in order to improve the Doberman’s appearance. It is generally accepted as fact that the two German breeds, which played a major role in the Doberman’s ancestry were: the old German Shepherd, now extinct: and the German Pinscher – the ancestors of the Rottweiler and the Weimaraner.”

The only thing of which we are sure is that Louis developed a breed so fine, so true, and so versatile, that few can meet its worth.

Image: “Looking For Fish” by Kevin Roeckl was an entry in National Purebred Dog Day Fine Art/Poster Competition of 2016. Entries are being accepted until November 15, 2022 for the 2023 Competition, Call for Entry details here.