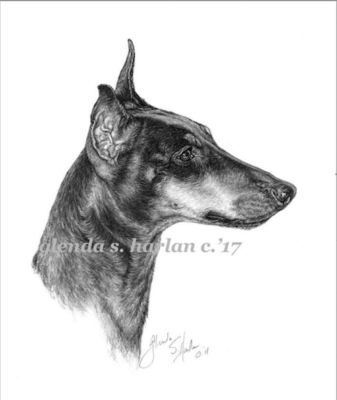 Sources vary in their opinion as to whether that distinction goes to the Manchester Terrier which was mentioned by Dr. Caius in his “Encyclopedia of Dogs” in 1570 as the Black and Tan Terrier,  or to the Skye Terrier which has older records under its current name. Certainly, Black and Tan Terriers existed in Great Britain for hundreds of years, and indeed, the earliest known illustration of this type of dog appeared in the illustrated manuscript, ‘The Hours of the Virgin’ dated at around 1500. 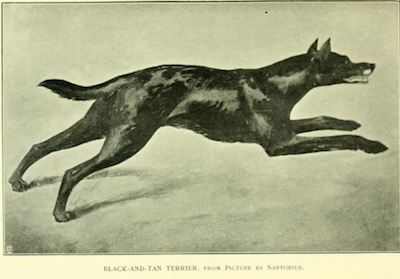 We know that by the early 19th century, the Black and Tan terrier was already beginning to typify the Manchester Terrier of today, and we know this not only because the artist, Sydenham Edwards (also seen as Sydenham Sartorius), depicted a Black and Tan which appeared in Alys Serrell’s With Hound and Terrier in the Field, but also because the Rev. Wm. B. Daniel wrote in his 1802 book, ‘Rural Sports,’ that “Types of terriers which are elegant and sprightly, with smooth coats, black in body and tanned on the leg.”

In the estimation of several experts, however, it would be mistake to believe that the today’s Manchester Terrier is the same dog as the old Black and Tan Terrier, but there is little doubt that the former descended from the latter.

John Hulme, a breeder from Manchester, is credited with crossing the rough Black and Tan Terrier with the Whippet in the 1800s to produce the sleek and agile Manchester Terrier of today, and it was in the 1879 edition of Stonehenge’s The Dog in Health and Disease that the name, Manchester Terrier, was mentioned for the first time. Interestingly, the common name for the same breed at that time was Black and Tan, or English Terrier. In fact, John T. Marvin writes in The Book of All Terriers that the name, “Manchester” didn’t catch on in England because it gave the area of Manchester “too much credit” for a dog that was popular all over the country. Still, it was John Hulme living in Crumpsall, a suburb of Manchester, who refined the breed into what we know today.