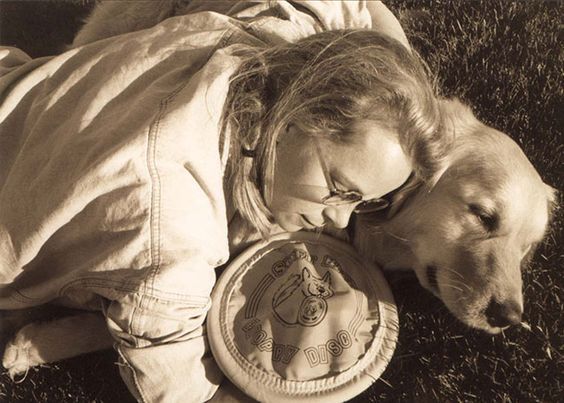 We think this one is. You have to bear in mind that we went into it with low expectations, and the only reason we did watch the video was because of who sent it to us.  As we started watching, we noticed the dog first, and then how tidy the house was. The lone woman in the video started to strum her guitar and we thought to ourselves, “She’s pretty good.” And then she started to sing. “Dang,” we thought, “she’s really good.”  Her song was enough to keep us watching, and when the dog in the background made his presence known, things got really entertaining.

If we had bothered to look at the name of the person in the video first, we would have had a slap-upside-the-head-“V-8” moment. No wonder she’s so good.  She’s won five Grammy Awards, and is one of only fifteen female members of the Nashville Songwriters Hall of Fame. The rest of you who are savvier country music fans than we are will need only look at her to know that this is Mary Chapin Carpenter.

She is a bonafide dog person. Sadly, she lost her oldest Golden Retriever, Finn, just before Thanksgiving in 2017.  Carpenter said, “She had a really great life and it was time to say goodbye. When she passed away it was the first time since 1994 that I didn’t have a golden retriever under my roof. You can imagine the hole in my life that she left.”

Yeah, we can. Every dog owner can.

She added, “Way back when, in the ’90s, one of my beloved friends, Reilly, loved to run out on stage during the up-tempo songs. There were a couple of places where people were right up at the foot of the stage. The joke going around our band was that while we always loved it when someone brought flowers to the stage, people were bringing dog biscuits to shows because they knew that Reilly would come running out and lick everybody’s faces in the front row. Goldens are the greatest creatures in the world.”

As we write, we’re in the throes of COVID-19, and a few weeks ago,  Carpenter started to offer solo performances from her kitchen in Virginia. When we’re lucky, she’s joined by a special guest, Angus, her dog and “co-producer,” who wanders in and out of the frame. Carpenter has created a few of this videos and we can’t wait to catch up with what we’ve missed. We think you’ll agree that they offer comfort, great listening, and more than a few smiles courtesy of “Angus,” the Golden Retriever whom she introduced to the world via Instagram a little over a year ago.

You can catch up with Mary Chapin Carpenter’s “Songs From Home” series on You Tube.  For now, enjoy!