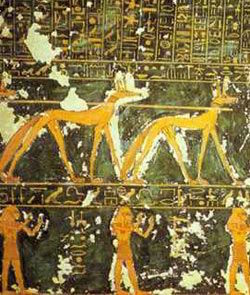 The discovery wasn’t a “one off.”

In 1935, Dr. George Reisner lead the Harvard-Boston Expedition in exploring a great cemetery west of the pyramid of Khufu at Giza. They found a 5th Dynasty inscription in the tomb of Antefaa II that had recorded the burial of a dog named, “Abuwtiyuw.” When translated, it read: “The dog which was the guard of his Majesty, Abywtiyuw is his name. His Majesty ordered that he be buried ceremonially, that he be given a coffin from the royal treasury, fine linen in great quantity, and incense. His Majesty gave perfumed ointment and ordered that a tomb be built for him by the masons. His Majesty did this for him in order that the dog might be honored before the Great God. In this way, the king ensured that his favorite hound would enter the afterlife and be waiting for him to continue his attendance when the king died.” With the inscribed text was a drawing of the dog which today we know as the Pharaoh Hound. As an aside, the image appears as the logo for the Pharaoh Hound Club in the UK.

And then came Professor W. B. Emery who worked on the excavation of the great mastaba tomb of Queen Her-Neith at Saqqara in the 1950s. He discovered the remains of a hunting dog buried at the threshold of the tomb of Her-Neith believed to be the wife of the Pharaoh Djer, and it resembled the dog that Reisner had found: A prick eared hunting dog with a long, lean head, lithe body, and a whip-like tail.

Beautiful Egyptian tomb paintings depicted these dogs, and our thumbnail image shows a detail of such a painting. You can see the full image here (and even purchase it).

If the visuals weren’t enough to be persuasive that these dogs were Pharaoh Hounds, then a 19th century translation of what had been written in hieroglyphics in the Eleventh Dynasty would be: “The red long-tailed dog goes at night into the stalls of the hills. He is better than the long—faced dog. He makes no delay in hunting, his face glows like a god and he delights to do this work.”

A face that “glows like a god” most certainly referred to the signature “blushing” trait still exists in the Pharaoh Hound.

3 thoughts on “The Face that Glowed Like a God”