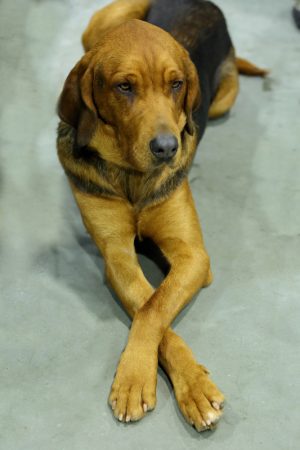 When local local hounds in Poland were bred with St. Hubert’s Hounds in the 13th century, resulting puppies were lighter-boned, more athletic versions of what was essentially the Bloodhound in their parentage. The dogs were called Ogar Polski, the word, “ogar” having appeared in 14th century chronicles in the context that “ogar hounds” were being bred specifically for royal hunts. “Ogar” was also found in Piotr Krescentyn’s Book on Rural Arts published in 1549, and again in The Life of an Honest Man by Mikołaj Rej from 1568.

English speakers will know the Ogar as the Polish Hound, but the etymology of the word “ogar” remains interestingly unclear. Some maintain that the word comes from the Polish word, ‘ogorzały’ meaning ‘tawny’ or a “weather-beaten” color; Another source suggests that the word was a derivative of the word, “grać,” which means “to give tongue,”, certainly a characteristic of the breed’s barking on a trail. A third writer explains that “ogar’ comes from the Czech word, “ohař,” meaning “the pointing dog.” The matter will probably never been conclusively settled.

Though it was recognized by the FCI in 1966, and the United Kennel Club in 1996, the Polish Hound remains quite rare outside of Poland whatever the origin of its name.

Image of a Polish Hound by ©Daniel Drobik/Dreamstime.com