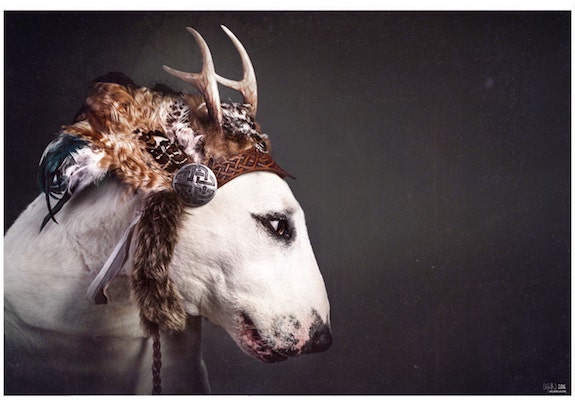 Based on the photograph here, any alternative name for the Bull Terrier should include the word, “Warrior,” but maybe that’s just us. Certainly it’s not how some other cultures have seen it.

The Afrikaans name for the Bull Terrier is Varkhond which means Pig-dog. While most people think that this is because of the dog’s pig-like appearance (which honestly, we don’t see), it’s more likely that the name came about from cross-bred bull terriers  used in the past for bush-pig and warthog hunting in South Africa, especially in the Eastern Cape.

Speaking of countries in the southern hemisphere, the oldest female Bull Terrier on record was an Australian family pet named “Pappu Trout,” who remained sprightly into her 17th year.

Image: “Wild At Heart” giclée of an original photograph by artist Lix North of www.lixcreative.com and www.lulubully.com.