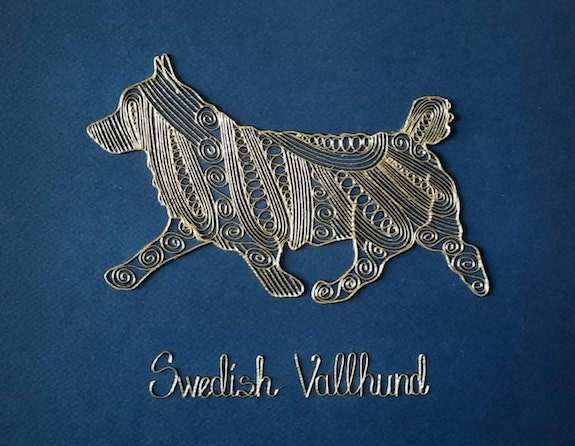 We should mention now that the only thing the aforementioned paragraph has with the next one is names. Not all our opening paragraphs are elegant. Or even make sense. Shoulder shrug. Sometimes it’s how we roll. That said, we awkwardly segue to the Swedes who covered all their bases by bestowing upon the breed we know as the Swedish Vallhund a name that touched upon multiple aspects of the breed.

You’ve suffered along so far, bear with us as we explain.

There are theories about the origins of the Vallhund. Some maintain that ancesters of the Corgi were pillaged by Vikings as they marauded through Wales and taken back to Scandinavia – particularly the area that would become Sweden’s largest province, Västra Götaland (Municipality of Gothenburg). There, the dogs developed into the Vallhund and an all around farm dog. This is how Corgi people see it.

Vallhund people view things a bit differently. They say that ancestors of their breed were taken to Wales by Vikings and left there. Over time, those dogs developed into Corgis that worked on sheep, and occasionally cattle.

The only thing both theories have in common is that Vikings were involved, and this is not in dispute since images of the dogs have been found as ornamentation on items found on Viking ships that were discovered in Ireland. Neither does anyone argue that the Corgi and Vallhund are members of the spitz family, which they would be regardless of which came first.

Where we’re going with this is to point out that historically, the Vallhund has been known as the Swedish Cattle Dog, the Swedish Herder Spitz, and the Vikingarnas Dog. Its Swedish name, however, covers all the bases: Västgötaspets translates to “Spitz dog of the West Goths” reflecting its relationship with the Vikings/Goths, to the spitz family of dogs, and to its connection to Götaland in Sweden. “Vallhund” simply means farm dog.

In 1964, the Swedish Kennel Club first recognized the breed as the Svensk Vallhund  However, the breed’s name was changed to Västgötaspets in reference to Vastergotland province where the breed was revived by Count Bjorn Von Rosen and his colleague, Karl Gustav Zettersten.  Today, the breed is registered with the FCI as the Swedish Vallund – Vizigothic Spitz (Västgötaspets).