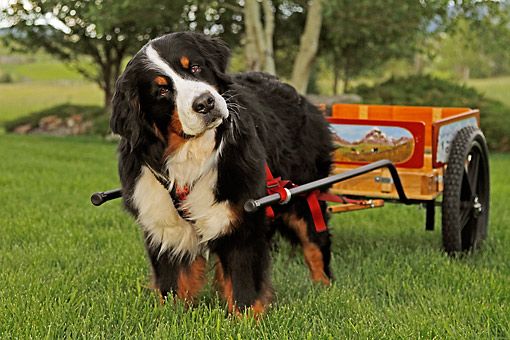 Any excuse to share the next best thing to puppy breath:

Wallonia is the French-speaking region of southern Belgium, and a very old Walloon expression says: “Pôves nozôtes et les tchéns d’tcherete” which translates into: “Poor us and our cart dogs.” In essence it meant that even if there are reasons to complain, there are others who have it worse.

This is, of course, in reference to those who relied upon dogs – and specifically, Bernese Mountain Dogs – to pull carts. Dogs, however, didn’t just pull produce, dairy products and goods. In the future,  they would pull stretchers in wartime, as well as war invalids who returned home from the war with one leg, or no legs at all.

The breed wasn’t always heralded for its contributions. On the 25th anniversary of the founding of the Swiss Kennel Club in 1908, two short-haired Bernese Mountain Dogs were shown by Franz Schertenlieb to a professor of geology, Albert Heim. Heim, an advocate of Swiss mountain dogs, recognized the dogs as representatives of the old, vanishing, large dogs. He encouraged breeders to take a serious interest in the breed, something that hadn’t been considered before, and it was through him that re-establishment of the breed was possible.

A year later, Berners were recognized as a separate breed by the Swiss Kennel Club and entered as “Grosser Schweizer Sennenhund” in Volume 12 of the Swiss stud book. That said, it wasn’t easy persuading owners of the dogs to participate in dog shows, farmers who actually used their dogs as working dogs and no knowledge or interest in breeding. Nevertheless, during their first exhibition, 22 dogs were presented.

Germany banned the use of draft dogs in 1987, something Belgium had done in 1957. Paris banned it in 1824, and the Netherlands in 1911. To our knowledge, however, dog traction is still allowed in Austria and in Switzerland, and is strictly regulated. It is still accepted as a leisure and sport related activity in most parts of the world, and indeed, the Bernese Mountain Dog Club of America approved Draft Test Regulations in 1991,  and the first Test was held in New England in the fall of that year. Regional clubs across the country continue to hold one or more Draft Tests a year,  and every BMDCA National Specialty since 1992 has offered Draft Tests.

Today, cart pulling is far from mandatory, and both dogs and owners enjoy the activity, in large part, we suppose, because a livelihood doesn’t depend upon it. In that context, “Poor us and our cart dog” is a thing of the past.

A good primer for those wanting to start cart pulling with their Berners will want to read this.

Image appears with the kind consent of the owner, Christie Leone: Photo by Mark Johnson/Images on the Wildside.