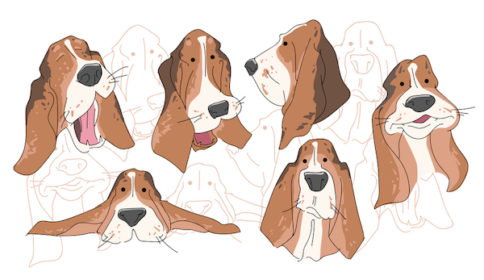 With regards to hunting in the English countryside, it’s been said that some people hunt to ride, and others ride to hunt. One more quip we came across, if a somewhat colorful one, is that you sure as hell can go hunting without a horse, but you can’t hunt without hounds.

Cue the Beagles and Bassets.

In the “old country” of Great Britain, hunting without a horse usually equated to hunting rabbits or foxes with Basset Hounds or Beagles. Hunting with these “foot hounds” versus hunting with Foxhounds was – and is still –  very similar, but one significant difference is that rabbits are smaller which makes it easier to hunt them on foot, while Foxhounds require a horse, and back in the day, not everyone could afford a horse, let alone feed it.

Hunting with a Beagle or a Basset Hound provides a slow, steady pace on foot across country, over fence and stream, and hill and dale. As far as we can tell, “beagling” and “basseting” differ only in the type of hound in the pack (but be forewarned. Never say “beagling” when you mean “basseting,” and not especially among people who do either because you will be regarded poorly, or worse, not regarded at all).

As of the mid 1980s, about 1,000 basseters participated in the sport, and one of them was quoted by the Chicago Tribute as saying, “‘Basseters are a little quirky. To stay with basseting, you definitely have to have a few screws loose.”

We’re not so sure. A romp through the woods provided a fine excuse for the high tea and good bourbon that was to be had afterwards, and given that there are about thirty-three recognized and active Beagle Packs in the United States today, and sixteen Basset Hound packs with between 1,000 and 2,000 participants between them, and perks of the sport still attract.

There’s also the actual experience that goes beyond being in the great outdoors and high tea afterwards (though as often as not, corned beef, potato soup, Irish soda bread and strong red wine await the hunters). Beaglers and basseters can’t be blamed for thinking they may have it “over” their mounted counterparts. Many participants will tell you that watching “foot hounds” at work, watching them puzzle-solve up close and personal without worrying about yours or someone else’s horse is the best part of hunting on foot. “No one is really out for blood,” beagler, Jessica Anderson, said back in 2010. “Beagling is more about the hounds than catching something. I’m in it for the dogs, but I’m rooting for the rabbit.”

These days, the American Hunting Basset Association and the Basset Hound Club of America are the most active in promoting the use of Bassets for rabbit hunting and field trialing. Bassets, it’s said, are especially enjoyable as they are a hound who enjoys life to its fullest, and is more than willing to provide (if not unwittingly) entertainment for those willing to watch these marvelous dogs. No rabbits are dispatched as the organizations are more interested in testing the Basset Hound’s skills at tracking/trailing a rabbit’s scent.

Those who choose to beagle will be performing a form of hunting dating back to the fourteenth century, if not earlier. There are a number of beagling clubs across the country, and interestingly, many beaglers are also deer hunters who have found that following a pack of Beagles as they run cottontails is a fine alternative to spending the day sitting in a tree stand. An added benefit is that while following the hounds, they’ve also learned a lot about deer movements and behavior by discovering hidden trails, tree rubs and scrapes, and even shed antlers.

2 thoughts on “Release the Foot Hounds!”