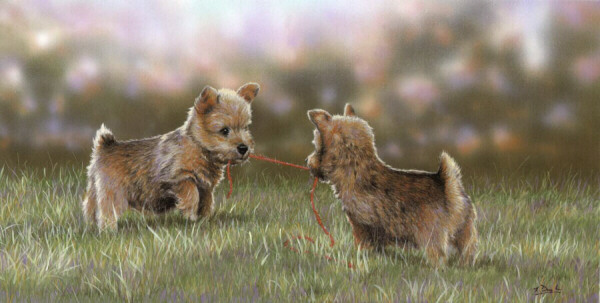 Until 1964, Norwich Terriers and Norfolk Terriers were considered to be one breed, and the two share a common history in the names by which they were known “back in the day.”

Today, the names of both breeds refer to their place of origin, the East Anglia town of Norwich in the county of Norfolk that lies just north of London, but early ancestors of the Norwich and Norfolk Terriers (remember now, they were regarded as one breed) were known as the Cantab, Trumpington, and Jones Terrier.

With the exception of the Cantab Terrier, early names make sense once you have a little bit of information.

In the 19th century, so many undergraduates of Cambridge University kept these dogs in their dorms to combat rat infestations that the dogs eventually became the official mascot of the University.  Stories conflict about whether Trumpington refers to the street on which most of these students lived (Trumpington Street is still around today and is an arterial road in southeast central Cambridge), or whether the name comes from the livery stable that was situated on Trumpington Street, the place where the students bought their dogs. Either way, we can almost hear you think, “Ohhhhh, that explains the Trumpington Terrier name.”

Jones Terrier is equally sensical when you learn that in 1914, a descendent of one of the Trumpington Terriers was acquired by a Brit named Frank “Roughrider” Jones who would come to breed a dog named “Willum.” Willum was exported to Philadelphia and became the breed’s foundation sire in the United States. Roughrider Jones was so intimately associated with these delightful terriers that the breed came to be known among American fanciers as the “Jones Terrier.” Even after the breed was recognized by the English and American kennel clubs in the 1930s as the Norwich Terrier, devotees of the dogs referred to their little canines as Jones Terriers.

Murkier, however, is the source of the name, “Cantab Terrier.” There was no street named Cantab, nor any person associated with the development of the breed by that name. Most sources simply say that because the dogs were so favored by Cambridge University undergraduates, the dogs came to be known as “Cantab Terriers,” but what is a “Cantab?”

Stay with us here. You know those letters that appear after a person’s name to indicate their academic degree, military decoration or accreditation? Those are called “post nominal suffixes.” “Cantabrigiensis” was the “post nominal suffix” that indicated a degree  from the University of Cambridge. Cantabrigian became a word used to refer to Cambridge University and its students, and the word was always shortened to “Cantab.”  Once you know that Cambridge University students were referred to as “cantabs,” you can make the connection between them and the dog they favored.

As an aside, the word, “Cantab” was still being used fairly recently. It was the name of the magazine produced by students at the University of Cambridge for nearly a decade between 1981 and 1990.