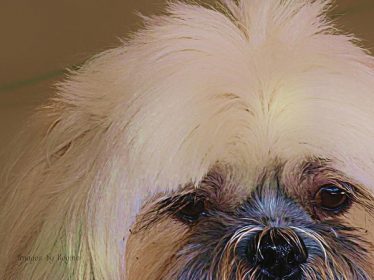 The “Roof of the World” sits on the largest and highest plateau on Earth, an isolated region that has an average elevation of 16,000 feet. There, in the place called Tibet, a breed was born that got its name from the capital city; the Lhasa Apso, also called “Abso Seng Kye” or “Bark Lion Sentinel Dog, was developed by Buddhist monks to be a sentinel, and to sound the alarm should strangers breach the sanctity of the monastery. Some monks believed that the souls of deceased lamas entered the dogs’ bodies while the lamas awaited reincarnation, particularly the mythical “Golden Lhasa,” whom, it was said, held the soul of Dalai Lamas.

A guardian by nature, the breed was well equipped to live in its environment. Long, dense and hard textured hair covering the dog from nose to tail protected him in the harsh Tibetan climate, and this included hair covering the eyes to protect it from wind, and the intensity of a sun at high altitude. Strong sunlight also made dark eyes and nose pigment an advantage as both sunburned less easily.

A compact and short-legged build enabled the Lhasa to conserve heat because the amount of heat produced by an animal is proportional to size. Being “well ribbed up” gave the Apso high altitude breathing capacity, while good pads on catlike feet enabled the dog to deal with rugged terrain (as well as jumping from high spots because the dogs, after all, often perched on a high walls where they could watch for strangers).

Lhasa were valued as bringers of good fortune (it’s considered very lucky to have an Apso in the house) and “back in the day,” the Dalai Lama sent dogs each year to the Emperor of China. The 13th Dalai Lama, Thubten Gyatso, also gifted the first two Lhasas in America in 1930 (other sources say 1933) to C. Suydam Cutting, a wealthy American naturalist and the first white Christian ever to enter the forbidden city of Lhasa (after five years of negotiations seeking permission).

Lhasas began to appear in the West around the turn of the century, brought back by British explorers, emissaries, and other travelers to Tibet.  in 1935,the AKC recognized the breed as the Lhasa Terrier and put it in the Terrier group. It was later renamed the Lhasa Apso in 1944, and reassigned to the Non-Sporting group in 1959.

Today, the friendly and assertive Lhasa Apso is a beloved breed regarded with affection for its spirit and solid self esteem.

Image of “Deuce by Regina Arnold is available as a print, poster, an greeting card here