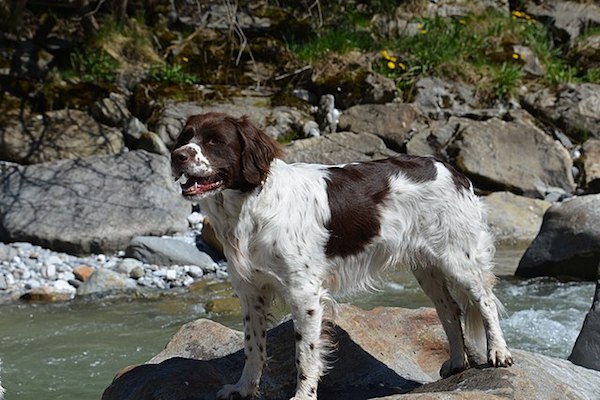 The Drentsche Partridge Dog is an old breed, one that probably originated in the 16th century from Spanish pointing dogs called Spioenen, or Spanjoelenn (from the Spanish word, Espagna). The Dutch originally called the breed partridge dogs for the obvious reason that they were used to hunt these mid sized birds (and despite the whole partridge-in-a-pear tree thing, the 56 partridge species are ground-dwellers). In the early years, the province of Drenthe was rather isolated from the rest of the country, and this is why the breed was successfully kept pure-bred. The only dog that may have been used at some point might have been the German Heidewachtel.

Our post now, however, addresses color and markings in the handsome Drent. The breed is white with brown plates, and white should be greater than fifty percent of the dog’s coat.  The brown ranges from a rich dark mahogany brown or shades of Hershey milk-chocolate to lighter shades of brown that can nearly appear reddish orange. Small spots that may or may not appear are called “spikkels,“and they are loved by some, not so much by others. Generally speaking, our impression is that less is more.

Mixtures of brown and white hairs are called “schimmel,” literally the word in Dutch for mold or fungus. As the name suggests, it’s not terribly favored, but it is allowed. That said, a dog covered in schimmel could be disqualified because it wouldn’t be 50% white. Solid brown heads are allowed, as well as white blazes, but a mantle in the United States isn’t desirable (the breed is currently on the AKC’s Foundation Stock Service) and depending upon the degree of seriousness, it could be a fault.

All that aside, the Drent is a marvelous hunting dog particularly because it can switch gears quickly. To a hunter, this means it can work on a variety of upland game and waterfowl, from aspen thickets to high-desert sagebrush. After the shot, the Drent smartly retrieves both from both land and water with determination and efficiency.