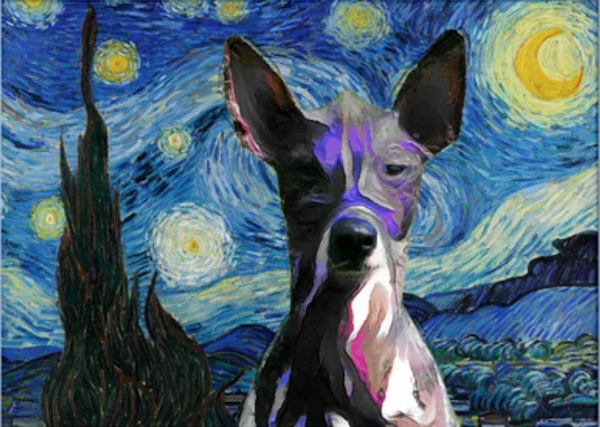 As befitting the quirky nature of some of our posts (which hints at the torturous route we sometimes take to get to the point), we start this one with a little “mood music:”

Blind since the age of sixteen, Moondog created a minimalist style that spawned Avant-Garde and Post-Bop music. He was heralded by the likes of Leonard Bernstein and Charlie Parker, high praise for a street musician whose stage was on 6th Avenue between 52nd and 55th Streets in New York City. If his music didn’t attract passers-by, “the Viking of 6th Avenue” attracted them by the clock and horned helmet he wore. Moondog passed away in 1999 at the age of 83.

“Moondog,” has been a popular term used in a variety of ways, from the name of a professional wrestling group in the World Wrestling Federation, to an optical lunar halo phenomenon.  Feeling lyrical today, we chose to start our post with the music of Moondog the musician, but there is a dog at the end of this intro, and that is Peruvian Inca Orchid Dog.

The PIO just might just be one of the earliest domesticated dog breeds known to humans. Early renderings of the dogs have been found in pottery dating back to 750 A.D., with pieces depicting the breed found on relics from the Incas, Chancay, and Chimu, all Peruvian cultures. It has been known as the Perro sin Pelo de Peru, the Perro Peruano, and the name preferred by Peruvians, Perro Sin Pelo de Peru (Dog Without Hair of Peru). Early Spanish conquistadors who encountered the dogs inside Incan homes named them “Perros Flora” because they were often found lounging near wild orchids.

There is one more nickname given to the breed, and that is (wait for it) – moondog. According to folklore, people often noticed that the dogs were far more active at night which some interpreted as an aversion to the sun. Given that the breed is usually (but not always) totally hairless, it’s possible that the dogs sensibly associated sunburn with daylight, so perhaps there is truth to it.

In 2001, the Peruvian government officially declared the Peruvian Inca Orchid a National Patrimony, and the breed is now protected throughout the country.

Image:Peruvian Inca Orchid by Sandra and Lazarela Sij, owners of NobilityDogs, can be purchased here.