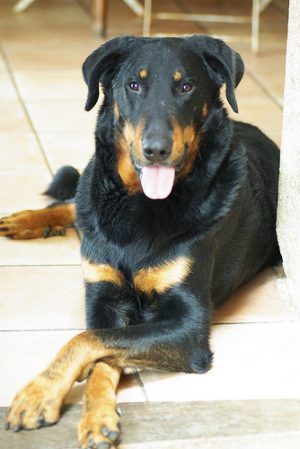 It’s a term the dog world borrowed from the equine world: Stockings. In horses, they are markings that extend higher than the knee or hock, and in dogs, stockings are a contrasting color on the feet and lower legs of a dog. Stockings is a term one may find more readily in a breed standard than in general glossary of dog terms, and sometimes not even then: The Beauceron standard, for instance, says that on a Black and Tan’s legs, “the markings extend from the feet to the pasterns, progressively lessening, though never covering more than one-third of the leg, rising slightly higher on the inside of the leg.” It never mentions stockings, per se, but the meaning is clear. Indeed, in France, the Beauceron is also known as Berger de Beauce (sheepdog from Beauce) or Bas Rouge: Red-stockings.

The desirability of having “stockings” wholly depends upon the breed. In a Redbone Coonhound, it’s a fault.