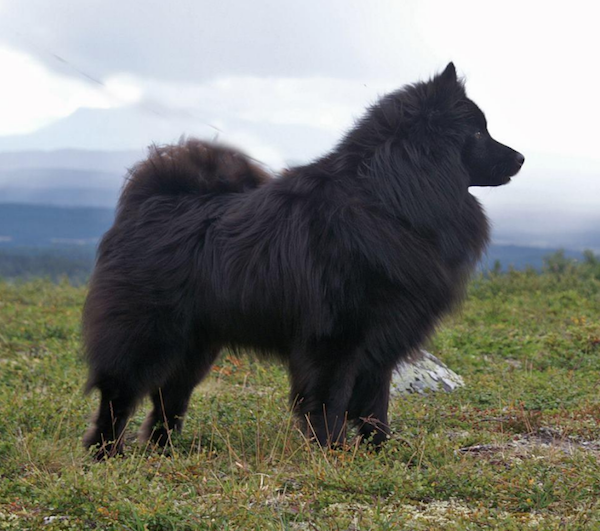 The Swedish Lapphund, likely one of Sweden’s oldest breeds, is originally from a land called Sapmi by the Sámi people. Thought to have followed the first Sami to Scandinavia during their migration circa 9000 BCE,  today the breed is very rare outside of Sweden; only approximately 1,200 of these dogs are believed to exist in the world, the majority residing in Sweden.

Ancient breeds often work their way into cultural folklore, and in Sámi mythology, it was said that the dogs sought out the Sami people with a deal; In exchange for being well treated, the Lapphund would be a worker and helpmate of the Sámi people. An accord was struck, and the dog has been a hunter and guard dog for the Sami people for centuries. When the Sámi people started to keep domestic reindeer in the mid-18th century, the Lapphund’s versatility made it easy to include herding in its repertoire.

At one time, several colors were allowed in the breed, and in fact, there were many white ones in the 1930’s. Later, white was later considered unwanted as these dogs were suspected of having Samoyed background. Today, the FCI standard indicates that the breed is usually solid black (bronzing is typical as more or less ”bear-brown” shades, while white on chest, on feet and tip of tail is permissible).  Indeed, the expression, “the Black Beauty of Norrland” is attributed to the Swedish Lapphund, such is the beauty of its black coat.

Anatolian owners, what is your breed’s most defining characteristic?

Anatolian owners, what would surprise most people about this breed?

For more, visit animal.discovery.com/tv/dogs-101/#mkcpgn=ytapl1 | The Anatolian Shepherd is one of the worlds largest and most imposing dogs.