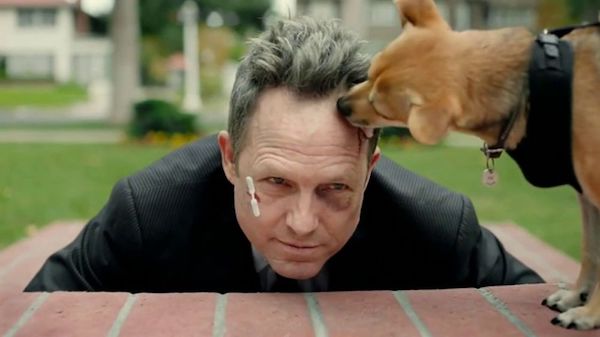 We think Allstate’s “Mayhem” is probably one of the best characters to appear in television commercials in the last twenty years.

In the ads, a chaotic event is personified by an actor wearing a suit and tie who, at the beginning of the ad, identifies the risk he is portraying. The actor’s face is usually bruised, scarred, or wearing a butterfly bandage, but it’s the actor’s smirk and delight at the “mayhem” he is causing that is so, well, engaging. Several of the Mayhem ads feature dogs, and the video below shows the latest one (and yes, that’s Tina Fey, a reunion of sorts since she and Dean Winters, who plays “Mayhem” appeared in 30 Rock together):

Virtually no information exists about the Pug (or any of the other dogs) in the ad. Not his name, his breeder, if he’s a purebred, not the trainer nor the agency that worked with the dog(s) and owner. Could someone please create an up-to-date IMDb (Internet Movie Database) of dogs that appear in films and commercials?

The breed isn’t identified in the following ads, but we all know dogs or situations like them:

In our view, Dean Winters “makes” these commercials. He’s been playing the character since the campaign was launched in April, 2010, but you may have seen him in the HBO prison drama, Oz, or Rescue Me, or in Law & Order: Special Victims Unit. He also had a wonderful role in the short-lived but vastly underrated CBS Network cop series, Battle Creek. We would liked to have written about Winters as a dog lover – which he is – but we were disappointed to see that his well intentioned tongue-in-cheek disaster-preparedness public service announcement urging viewers to always be ready for blizzards, tornadoes, floods, and earthquakes was done for PETA. PETA is no friend of animals, and we’ll leave it at that.