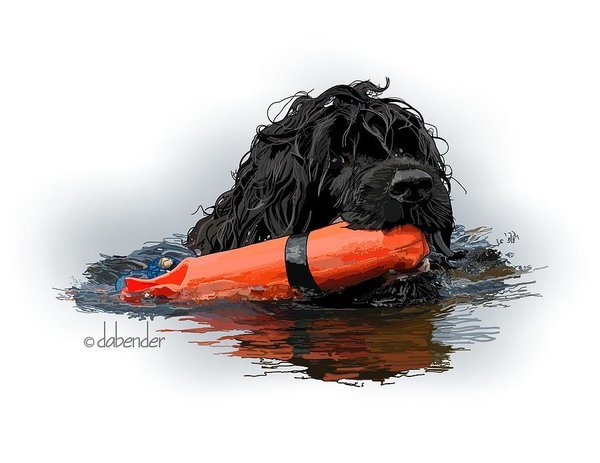 On the way to writing about the Portuguese Water Dog’s prowess in water, we got sidetracked. It happens a lot here. And this is why we’re now segueing over to Mariah Carey. The singer has a multi-octave vocal range that can reach five octaves, and if you doubt it, watch and listen to the 36 seconds long video clip below:

Carey just might have the range of Peruvian soprano, Yma Sumac, whom many considered to have had one of the biggest vocal ranges of any singer to this day, though critics suggest that Carey’s upper range is more like whistling. We’re not sure that’s fair since the upper range of Sumac’s voice doesn’t sound much different from Carey’s. Since it’s exceedingly difficult to article words at the top of a octave voice, how does one measure?

Dogs don’t need to articulate words, but a full range of notes used with heartfelt expression communicates just as nicely, and that’s why the Portuguese Water Dog is said to have a multi-octave voice. PWDs tend to be quiet dogs, but when they want to “share” their sentiments, they seem to have command of a breadth of pitches. Some are even said to “yodel” when excited. We found a video that gives us a hint of their range:

After watching this, some of you may be thinking that you have a mezzo soprano of your own at home, and you may, but the PWD’s multi-octive vocalizations are a breed trait mentioned by many breed clubs, and owners find it quite endearing.

We had originally wanted to talk about the breed’s water talent: From herding fish into nets and retrieving lost tackle or broken nets, to acting as courier from ship to ship or ship to shore, the breed is (if we’re sticking with celebrity analogies), the Esther Williams of water. But then we saw the whole “multi-octave” thing and thought, “No, we’ll go this way, instead.” We hope you agree.