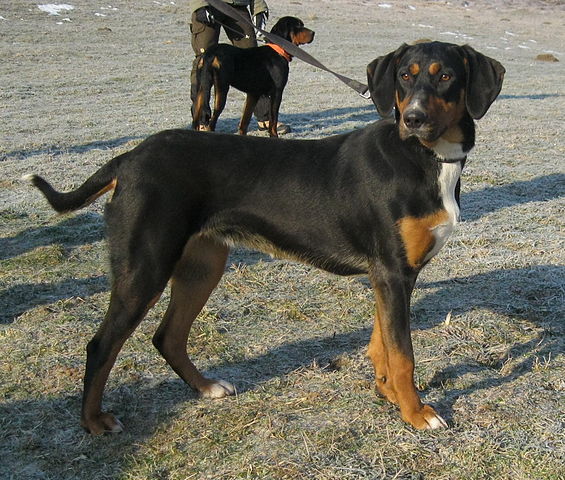 By now, you all know how to pronounce the plural of the Hungarian dog breeds, right? Right?

Some might say there’s a breed missing from the list, the Erdelyi Kopo, or Transylvanian Hound, and its “Hungarian-ness” depends upon the source. Hungary was a country divvied up after WWI, and people who’d regarded themselves as ethnic Hungarians living in Hungary now found themselves living in a different country even though they’d never moved! Transylvania was part of the Austro-Hungarian empire, and after the war, it became part of Romania.

Though the breed’s name is “Transylvanian,” the smooth-coated scenthound originated in Hungary over 1,000 years ago when dogs belonging to invading Magyars bred with dogs then native to Hungary. Eventually, one type of dog emerged, but because of varying terrains, there were two versions of it, one with longer legs than the other. Over time, the longer legged dog prevailed, the other vanishing into the mists of time. The hound became highly valued as a bear and wolf hunting dog, particularly by Hungarian royalty and aristocracy during the Middle Ages, but industrialization, a shrinking of agriculture, and developments in forestry pushed the breed back into the woods of the Carpathian mountains, and a decline in the breed resulted. By the beginning of the 1900s, the Transylvanian Hound was almost extinct.

Happily, Hungarian breeders revived it with determined and organized breedings in 1968, and in 2006, the Transylvanian Hound was recognized by the United Kennel Club. In 2015, the breed was accepted into the AKC’s Foundation Stock Service Program for breeders hoping to establishing it in the United States. That said, it’s still a rare dog breed in this country, and may stay so as it’s not a breed for everyone.

Some may find hard the breed’s independent nature hard to manage, but blame should go to how – and where – the Hound was bred. The dog had to locate and hunt game on his own, then return to his owner only to the sound of the hunting horn without any kind of direction from his owner. This was due to Hungarian hunting laws which dictated that hounds could only be used to drive wild boars and look for wounded game. Accustomed to vast Transylvanian forests, hounds also don’t find it easy to adapt to broken up hunting areas found in other countries, but they can learn that it isn’t worth wandering away from the line of driving since the prey can only be shot there.

These days, the hounds are kept mostly by hobby keepers, and until recently, a small percentage of hunters who value their stamina, excellent nose, uncanny sense of direction, and a resounding, high pitched and ringing bark that gives the hunter his dog’s location during a hunt. More and more hunters, however, are discovering the breed. The bigger challenge for them may be in finding one. It’s thought that around only around 800-1000 hounds live in Hungary, and only 80-90 pups are registered each year. Not helpful to the gene pool are litters are born from un-pedigreed parents who were likely not health tested.

For the right owner, this handsome, balanced and friendly dog makes an ideal companion.

4 thoughts on “The Erdelyi Kopo: Hungarian or Transylvanian?”