His name was Alexander.

He was named after the chap who was the Pipe Major of the 1st Battalion The Canadian Scottish Regiment between 1930 – 1939, Alexander Wallace. There was even a pipe tune named for them both.

By the way, the latter Alexander was a sad-eyed Saint Bernard.

Alexander was only a year old when he joined the 1st Battalion at Macaulay Point in 1939. When the battalion moved to Debert, Nova Scotia, the dog (whom they called Wallace) went with them. And when they went overseas, Wallace was snuck on board the ship, Stratheden.

They chloroformed him to manage it.

Some rat (our words) spilled the beans that a big dog named Alexander was on the troop ship, and while eleven other dogs were found, they never found Wallace.

The concealment was short-lived. Wallace was discovered when he went ashore, and upon arrival in Scotland, he was quarantined for six months. After that, he bunked with the Battalion until 1944, and after Operation Overlord, better known as “D’ Day,” the Royal Scots in Glencorse fed him and tucked him in at night. Wallace rejoined his Battalion in 1945. It should be noted that other sources say that the Royal Scots kept Wallace in Edinburgh Castle for the duration of the war.  Either way, a year later, Wallace lead the parade all the way from the Canadian Pacific Railway dock to the Bay Street Armory. The video below is poor in quality, but it is of Wallace!

Wallace lived at the Government House for a while, but he kept running away (probably looking for action), but eventually the grand dog stayed with the person who had been his minder in England, Piper “Wee Andy” McGeorge. 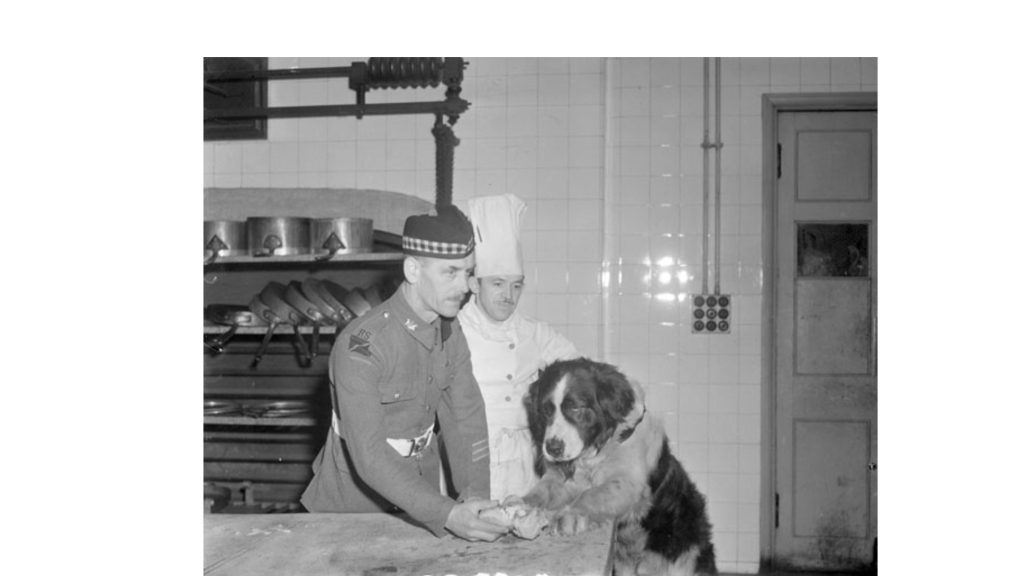 Wallace, the mascot of the 1st Battalion, The Canadian Scottish Regiment, being fed at a ceremonial dinner at the Mansion House attended by H.R.H. the Princess Royal, London, England, 6 December 1945

Our inference is that Wallace died in an accident, but we found no details about it. After his death, the grand dog was cremated in November of 1950, his ashes placed in keeping of the Officers’ Mess, as was an oil painting of him presented to the Battalion by Her Royal Highness, Princess Mary.

We had thought that regiment kept up the tradition of having a Saint Bernard mascot named, Wallace, and that the latest one, Wallace VI, died in 2011 never to be replaced. More information on the subsequent dogs can be read here, but then we found this: 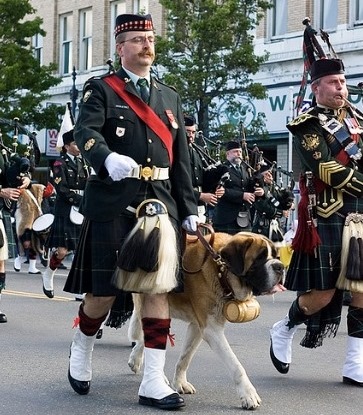 q
It was found on the Facebook page for Kilts and Culture, the caption from 2020 reading: “The former Wallace VI, Regimental Mascot, The Canadian Scottish Regiment(Princess Mary’s). Tartan is Hunting Stewart.”
From there, clues dry up, and if anyone can shed more light on Wallace, the Regimental Mascot, we’d love to hear it.
All our images have come from pages that don’t indicate copyright protection on the photographs. If we are in error, contact us!