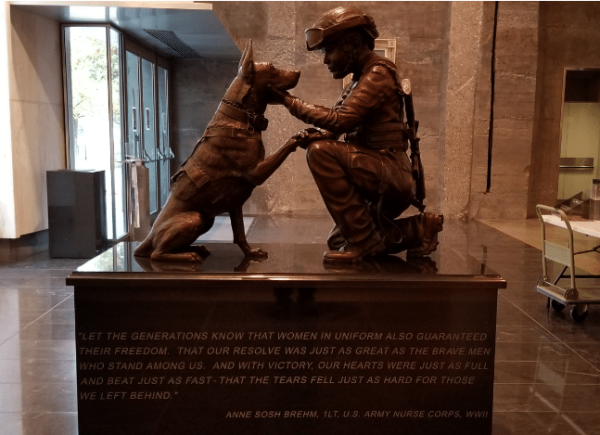 We don’t think it got nearly enough attention at the time, probably because Covid was the topic of most headlines, but in the fall of 2020,  a new statue honoring U.S. military servicewomen was unveiled at Arlington National Cemetery in Virginia. Entitled,“The Pledge,” the sculpture is part of the Women In Military Service For America Memorial located at the entrance to the cemetery. Inscribed into the front of the statue’s pediment are these words: “Honoring all women of the U.S. Military Past, Present and Future.”

The life-size bronze statue depicting a female dog handler in full gear kneeling next to her K9 was commissioned by the U.S. War Dogs Association National Headquarters, and created by sculptor, Susan Bahary. The piece captures a private moment of mutual respect and love between handler and dog (likely a Belgian Malinois), a quiet promise to support and keep each other safe in the course of their mission.

Military working dog teams representing the U.S. Marine Crops, U.S. Navy, U.S. Air Force and U.S. Army attended the unveiling, but it was otherwise a closed ceremony because of Covid. It was live-streamed on Facebook by The Women’s Memorial.

It may interest readers to know that while the Pentagon began to allow women to serve in combat roles in 2015, women were allowed to serve as handlers for military working dogs even before then, and often worked alongside combat units in harm’s way.

See more images and read more about “The Pledge” here.