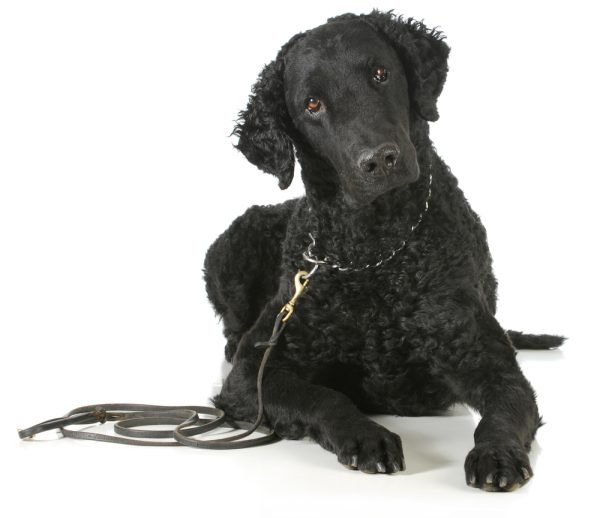 The English Water Spaniel is long gone, the last specimen seen in the 1930s.  A pity for a storied breed that could be traced to the 1500s.

The Tweed Water Spaniel is also extinct, though its DNA does live on the gene pools of the Golden Retriever and Curly Coated Retriever, two breeds which incorporated it in early development.  Fantastic breeds, both, but in this post, we expand a bit about the Curly Coat.

It is the oldest of the surviving English retrievers, and the first breed to be used seriously as a retriever in England. In fact, some historians suspect that it may also have been first breed of dog known formally as a “retriever” in England.

Before then, there was no retriever breed, per se. The word ‘retriever’ simply referred to any dog that retrieved, and that could include sheepdogs, spaniels and setters. British hunters learned that none of the aforementioned dogs combined the necessary attributes needed to do the job, namely, possessed of a soft mouth, a good nose, a coat impervious to the elements, and the drive to retrieve all day long. Nor was it good for a pointer or setter to fetch game, this the opinion of a writer of the day.  Retrievers were born of necessity when guns were used to hunt.

Curlies were likely the result of crosses involving the Large Rough Water Dog (a descendent of the English Water Spaniel) the Tweed Water Spaniel, and, according to the UK’s Curly Coated Retriever Club, possibly the Irish Water Spaniel, the Wetterhound, Barbet, and Poodle.

In 1860, the Curly was first exhibited in the British show ring at the National Exhibition of Dogs. Four years later, there were separate classes for the wavy coated and curly coated varieties, but by then, the Curly Coated Retriever had become one of the most popular breeds in England. With its athletic body, webbed feet, and signature curly coat, it was often the breed of choice for large estates. Sadly for the breed, the introduction of the Labrador Retriever impacted its popularity, and the CCR never really recovered. In 1918, only five Curly Coats were registered with the Kennel Club, but in 1994, an eye popping 168 dogs were recorded. The surge didn’t last. The breed was put on the Kennel Club’s Vulnerable Native Breed’s list in 2006, and last year in 2021, only 62 CCRs were registered.

The AKC recognized the breed in 1924,  but it had already been in America for seventeen years, the first having arrived in 1907.

Australia was a bit quicker to act. The first recorded information on Curly Coated Retrievers in Australia goes back to the early 1880’s, though many believe that the breed existed there before then. A statue of the poet, Robbie Burns, was erected on Sturt Street Ballarat in 1887 by Giovanni Udny, and there is little doubt as to the breed by his side.  Six years earlier, three Curly Coated Retrievers were exhibited at the New South Wales Royal Show.

Today, the Curly-Coated Retriever is regarded as an uncommon breed, if not rare in some countries, but its numbers should not be considered a reflection of the breed’s suitability for life at home or in the field.  This is a famously versatile gundog –  proud, poised, and wicked smart. Indeed, it’s written that the Curly is a thinking person’s retriever who will never quit before their owner does. With her loved ones, she is playful and mischievous, but discerning with strangers.  A marvelous breed.

Image: Deposit Stock photo. Update: Since posting this piece, we’ve been told that the dog in the photo may be “Gershwin” who passed in 2017.  Sadly, on the very day we published this post, we learned that Gershwin’s owner, Hil Culp, passed away unexpectedly. Rest in Peace to them both.