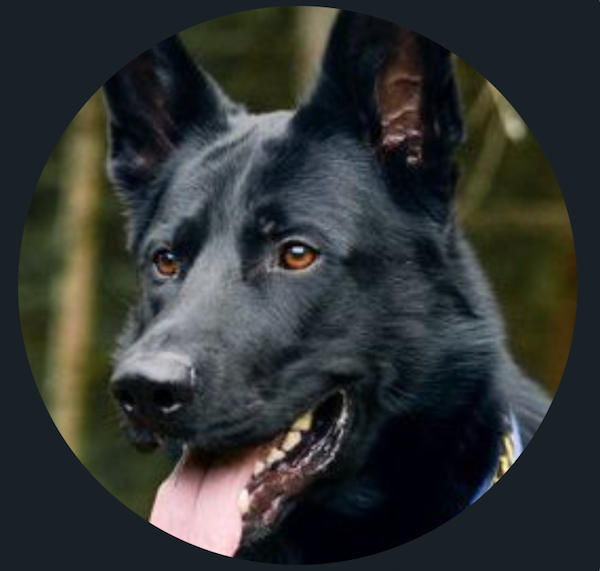 It probably matters to the owners of the dogs involved, but we don’t care who was first. We simply think it’s astounding that dogs can be trained to detect the presence of old bones. Really old bones. As in thousands of years old. But we get ahead of ourselves.

When an Australian dog named “Migaloo” detected a 600-year-old Aboriginal grave in 2012, his trainer, Gary Jackson, probably thought that Migaloo was the first trained “archaeology dog” – and maybe he was.

The people behind now six year old black German Shepherd Dog, Fabel (Thunder Dust’s Quento) also claimed that Fabel was “the world’s first scientifically tested archeology dog, and perhaps it’s the “scientific testing” that’s the difference between Migaloo and Fable. The latter underwent scientific tests in 2015 conducted with the Nordic Dog and Museum Archeology Southeast that proved Fable can distinguish between human and animal skeletal material with a reliability of 94.2%. Working with owner and Swedish archaeologist, Sophie Vallulv, Fabel has located bones up to 1,600 years old at a depth of five feet, and Vallulv thinks that may be just the tip of the iceberg of Fabel’s capabilities. You can read more about the two here.

In Croatia, a team from the University of Zadar using three Belgian Sheepdogs and one German Shepherd Dog uncovered a 3,000-year-old settlement on the Velebit Mountian in 2018. The dogs are now pointing to a complex site made up of a prehistoric necropolis, a Roman settlement, a fortress, a church and a road. Researchers are encouraged that the dogs can be used to find mass graves — a perpetual issue in Croatia after the 1990s war left a long list of still-missing victims.

Archeology dogs are being used in the United States, as well. Tracy Sargent’s trained cadaver dog, a German Shepherd Dog named “Draco,” became an impromptu archeological dog” when he identified battlefield gravesites from the Revolutionary War in Georgia. In less than 15 minutes of whiffing and sniffing back and forth over an area of less than half an acre, Draco stopped quickly and sat facing Sargent. The possible gravesite needed confirmation which was provided by two other dogs, a large mixed breed, and a black German Shepherd Dog.  Now this part of Georgia can now be reclaimed so that visitors can learn how the South played a key role in defeating the British and helping the American Revolution. As U.S. Representative Jody Hice of Georgia said, “they can feel connected with those who gave their lives to give us the greatest country in the world.”

As it turns out, some dogs can be “amateur archeology dogs.” Last year (2018), a dog named Monty (breed unknown) who was out for a walk in his Czech village of Kostelecké Horky began enthusiastically digging in a field and unearthed thirteen sickles, two spear points, three axes and several bracelets from Urnfield period of the Bronze Age – items over 3,000 years old!

Cadaver dogs can help police in finding individuals they believe may be dead. These dogs pick up on chemicals being emitted from decomposing bodies, and have solved endless cases where police had a suspect, but no body to prove their case. These dogs help bring closure to bereaved families and friends.

Archeology dogs go back further and un-earth graves and sites from ancient times, but they need to learn the scent of old bones. In a living person, bones are comprised of collagen, a form of protein, and in a warm, humid climate, a buried person’s bones can decay within ten years, while in a dry climate, the bones can stay intact for thousands of years.  Amounts of collagen can also survive depending on climate and environment. Some petrified fossils have been known to still have living remains – especially in cold places like Alaska. Indeed, there are more than 400 scents of death, and decomposition releases hundreds of complex compounds even after 2,700 years in the ground.

We’ve used a couple of terms so far – cadaver dog and archeology dog, but there are more.

As alluded to earlier, a Cadaver Dog is trained to locate human remains. A “Decomp Dog” (a term thought to be coined by the NecroSearch group)  better describes how dogs will indicate decomposed human scent which includes blood, feces, urine or other material with human scent on it. A Forensic Evidence Dog can describe several specialties that can include, but not be limited to, firearms, weapons, articles or scent discrimination. Some people describe Forensic Evidence Dogs as Human Remains Detection Dogs. A Water Search Dog is trained, as you would expect, to locate dead bodies under water from a boat or on shore, while a Historical Human Remains Detection Dog (or what we’ve been calling an Archeology Dog) helps locate historical or archaeological graves.  It takes years of slow and patient training to develop the skills needed to do this work, particularly since this kind of searching requires a dog to be slow and methodical,  and keep his or her nose just above the surface of the ground. Any fast moves, and the dog can miss a grave.

If this sort of thing is interesting to you, you may find even more fascinating the work being done by the Institute for Canine Forensics.