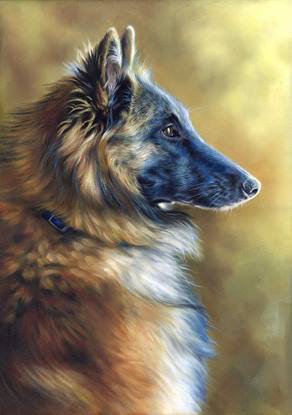 In September 1891, however, the club of one country set out to determine which dogs were uniquely representative of shepherd dogs developed solely in their country. The country was Belgium, and the club was the Club du Chien de Berger Belge (Belgian Shepherd Dog Club). Breeders, fanciers, a veterinary professor, and a panel of judges examined local dogs, as well as dogs in other Belgian provinces, and concluded that shepherd dogs native to Belgium were square, medium sized dogs with well-set triangular ears and dark brown eyes that differed from each other only in coat texture, color, and length.

The elegant Belgian Tervuren was one of those four Belgian Shepherds, a dog that owed its name to a village east of Brussels where an early advocate of the breed, M. F. Corbeel lived.  Corbeel was the breeder of “Tom” and “Poes,” a pair of dogs commonly considered to be the foundation of the Tervuren breed. “Milsart,” the fawn-colored grandson of these dogs, was the first Tervuren to achieve Champion status way back in 1907.

The Tervuren very nearly became extinct during both World Wars and was saved by a small group of dedicated breeders. Some sources suggest that today’s Tervuren likely has longhaired Belgian Malinois and Groenendael blood behind it as a result of efforts to save the breed in those days, but we always defer to the breed experts.

The Tervuren grew in popularity and became prized as a versatile herding dog with a strong work ethic. In 1959, the American Belgian Tervuren Club was started by two AKC breed and obedience breeder/judges. From that point, the AKC recognized the breed as the “Belgian Tervuren,” but elsewhere, such as in Europe and Canada, the Tervuren is currently recognized as a variety of the Belgian Shepherd, not a separate breed.

From the beginning, the American Belgian Tervuren Club club adopted the motto, “A well-balanced Tervuren has a Ch. on one end and a UDT on the other,” to emphasize multiple achievements. The result is that today, the Tervuren consistently earns the most conformation and obedience titles of the Belgian Shepherd Dogs.

2 thoughts on “The Well-Balanced Tervuren”