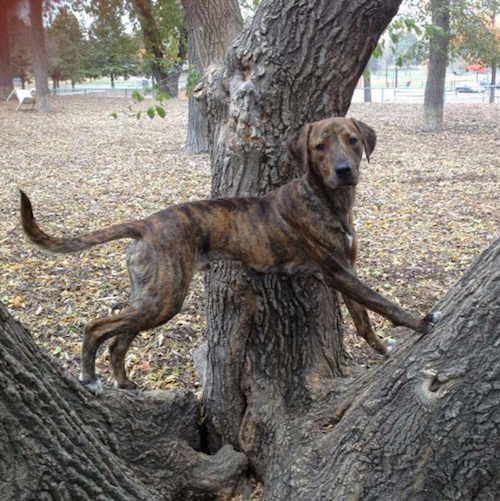 The Plott Hound is a pretty interesting breed for a lot of reasons. The breed that originated from the mountains of western North Carolina is that state’s dog, and has been since 1989. That might be one thing you don’t already know.

We can credit Johannes Georg Plott for this breed. When he arrived from Germany in Colonial America in 1750, he brought with him five Hanoverian Schweisshunds bred by his father,  a gamekeeper in the “old country.” And that might be the second thing you might not know about the Plott: It’s the only Coonhound not descended from the Foxhound.

Westward migration took Johannes to Catawba County, and eventually, the pack of hounds passed down to Henry Plott who moved even farther west to Haywood County. When his crop failed in 1800, Henry relied on his dogs’ hunting skills to help them make it through the winter because having removing undesirable dogs from the family breeding program, the Plotts had developed a tremendous hunting dog for wild boar. The Plott Hounds reputation spread, particularly among hunters, and that leads us to the third thing you might not know about this breed: It’s the only breed we’re aware of that has a breed standard specifically allowing for the presence of an identification mark on the dog’s rump used to identify the dog when out hunting. To see a picture of a show dog with such a mark, click here.

Photo by @soopermolly from the AKC website with permission