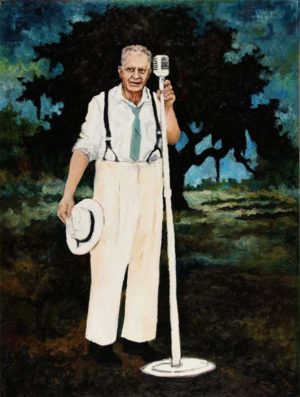 Earl was nothing if not colorful. Even though he seemed always to live in the shadow of his flamboyant older brother, his colorful verbosity and eccentricity made it tough to discern much difference between the two. An affair with a Bourbon Street stripper didn’t help matters. It might have actually gone unnoticed had Earl not been governor of the State of Louisiana at the time.

“Earl” was Earl Long,  younger brother of Huey Long. In his own right, he was a fiery and charismatic politician with an astute political mind of considerable intelligence who moved up the ranks at a young age. His detractors called him a demagogue and a radical, someone who turned his back on established processes in order to win, and win he did. He served three nonconsecutive terms as governor, and might have won a congressional race had he not suffered a fatal heart attack. Others, however, credited Long for his work on behalf of Louisiana’s infrastructure, education system and health care.

For our purposes, however, we look at Earl Long as a champion of the Catahoula Leopard Dog. Long took an interest in the breed, possibly because of the attention it got when President Theodore Roosevelt was introduced to a pair of Catahoulas while on a hunting trip to Louisiana. Not one to do anything half way, Long began to assemble the dogs, and in the manner of European royalty, Long often gave a Catahoula as a gift.

After a while, Earl found himself with a lot of dogs. Several of the dogs had been sent the to the State Prison farm in Angola, and to the State Police Stock Patrol. After Long’s death, however, the dogs were almost forgotten. It was a former state trooper named Kline Rushing, and Vernon Traxler Jr. who invested their energy along with other breeders to make the breed known. They began 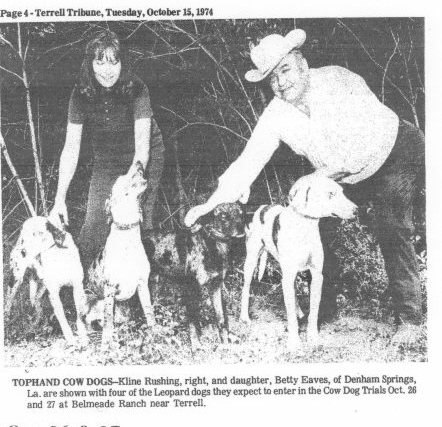 A newspaper clipping of Kline Rushing and his daughter, Betty

keeping records of the matings, and in 1971, Rushing established Tophand Kennel (a “kennel” in name only) and began to talk about registering the Catahoulas. He had always taken the Catahoulas to the Animal Research Foundation in Quinlan, Texas, the only place one could register them back then. Sadly, Rushing suffered a fatal heart attack in 1977 before he could advance his cause.

Record keeping, registration certificates, puppy papers, and litter applications is the main function of NALC, but we admire the organization’s attitude that not everyone needs a Catahoula. Their goal is to protect the breed by discouraging buyers for whom the dog isn’t suited.

As it should be.

Anyone with an interest in Earl Long may want to see the movie, “The Blaze,” staring Academy Award winner, Paul Newman, as Earl Long.

Image: Painting of Earl Long by Lafayette artist George Rodrigue (of Blue Dog fame) which is in the Haynie Family Collection and appears in 64parishes.org for the purposes of criticism, comment, teaching, scholarship, educational research, and all other nonprofit educational usages under Section 107 of the U.S. Copyright Act.