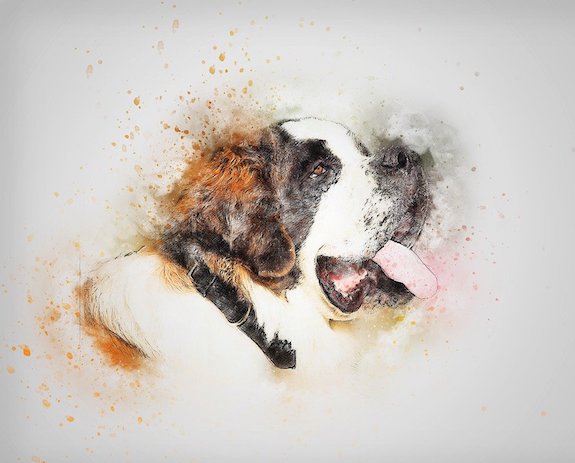 Historically, the mountain pass from which the Saint Bernard breed gets its name was geographically important as it links Switzerland and Italy; it was critical enough that the ancient Roman Emperors, Augustus and Claudius, made substantial improvements to the route and designated it an imperial road. A small temple honoring Jupiter (Jovis) was built on top of the pass, and the mountain was renamed “Mons Jovis.” The pass eventually became a common path for pilgrims making the journey to Rome through the mountains between Italy and Switzerland.Later, a hospice and congregation were founded there in the eleventh century by St Bernard de Montjoux, also known as St Bernard of Menthon, an archdeacon in the City of Aosta. The monastery was unable to become entirely self sufficient without “seed money,” so to speak, and thus donations were made to the order starting in 1125. It wasn’t until the sixteenth century that the pass and the monastery were given the name, “Saint Bernard,” and not until around 1660 were dogs kept at the Hospice to serve as watch dogs against marauders.

It would be a mistake to think that the “hospice dogs” we know today as Saint Bernards were unique to the monastery or even the mountain pass.  The red/brown and white dogs were widespread among farm dogs in the valleys of the Valais and in the countryside of Berne. Some sources suggest that among the donations given to the monastery were dogs gifted to it by locals. The monks easily replenished their pack from the local dogs, and just as easily helped set type in the breed owning to the monastery’s isolation for long periods of time.

To further underscore the fact that Saint Bernards were not solely the purview of the Monastery, an expert on the breed, Albert Heim,  wrote in 1927: “Talhund und Hospizhund waren und sind die gleiche Rasse.” Translated, it means: “Valley dogs and dogs from the Hospice were and still are of the same breed”