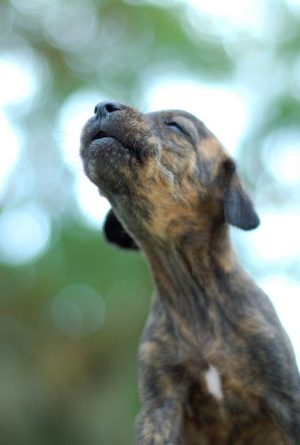 You might want to turn the volume down on the video that follows because if you have dogs in the house (and most of you do), this could set them off.

What we want you to see – or hear, more precisely – is the definition of  an “open, unrestrictive voice” (or in this case, several of them). It’s a phrase one might encounter when researching the Plott Hound, but their owners often call it “Plott Music.”  If you aren’t an experienced coonhound person, you might think it sounds like any other coonhound, but we’ve read that their voice is special to the breed. Their sound is a slightly different from other scenthounds and it’s distinguished by a loud, ringing “chop” whether they’re trailing an animal or have cornered or treed the game. There are other dogs in the video, but we think you can pick out the Plott.

It’s sheer speculation on our part, but we wonder if it has to do with the fact that the Plott Hound is the only coonhound breed that doesn’t have ties to the Foxhound. What say you, Plott Hound owners?

As you just heard, Plott Hounds can bawl and squall with the best of them. Their clear voice carries well, and that’s an asset to hunters who can tell from their dogs’ vocalizations not only where they are, but where they are on a scent.

By the way, some of you might be wondering about our use of the word, “hound” when identifying the breed. For a long time, the breed was known simply as the Plott, but in 2019, the AKC voted to change the name of the breed from “Plott” to “Plott Hound.”