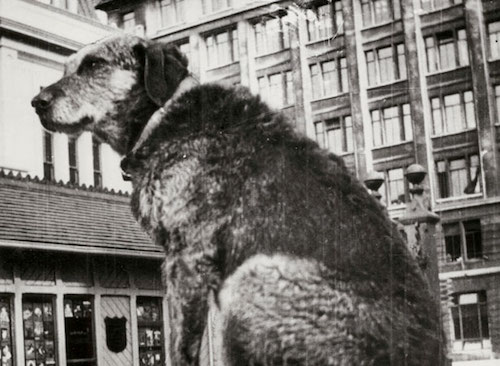 A “community dog” could never happen today, but history is replete with stories of dogs that belonged to no one and everyone, and “Paddy,” was one of them.

In truth, Paddy, described as a ginger and brown Airedale Terrier, did have an owner, Elsie Marion Glasgow, the young daughter of a seaman living in Wellington, New Zealand in the 1930s.  His name was Dash then, and legend has it that when Elsie died of pneumonia in 1928,  Dash ran away and took to wandering the waterfront in search of his young companion. Dash – now Paddy – became a familiar face on the wharfs, and the dog oozed personality.  He was said to have been able to predict the weather, had a knack for stowing away on ships, and had many adventures, including a crossing of the Tasman Sea and several trips to Australia. Taxi drivers gave him free rides around town, tram drivers welcomed him on their train, and Paddy even managed a quick flight on a Gypsy Moth airplane where he was held by one of his friends – a taxi driver – to ensure that he would’t jump out of the plane from fear.  The Evening Post reported that he knew the traffic lights, and wouldn’t cross a street until the green light showed.

Dock workers “hired” him to work security and control the rodent population, and between cab drivers, stevedores, sailors and shop keepers, he was kept fed, legal (they took turns paying for his annual dog license) and collared. Eventually, the Wellington Harbour Board took responsibility for Paddy and gave him the title of “Assistant Night Watchman In Charge of Pirates, Rodents and Smugglers.”

Old age kept Paddy from making his rounds as he once did, and when he became ill in 1939, local cab drivers collected the funds to put him in a kennel to recover. When one of the drivers visited him, however, Paddy jumped in the back of the cab and wouldn’t come out. He was returned to his beloved docks where a cozy bed was made for him in one of the sheds, and it was where he died in 1939.

The city stopped. Notices were placed in the local papers, and a radio tribute was broadcast. Hundreds of people mourned Paddy’s death, and a funeral procession of black taxi cabs accompanied his body across town. The Evening Post wrote: “Fifty or sixty watersiders and seamen watched the cortege start on its short journey from Queens Wharf to the crematorium. A traffic 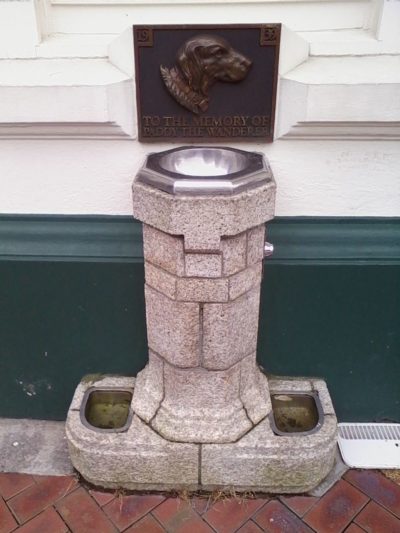 officer led the way.  It was “no mock affair but a touching tribute to a good comrade.” “I’d give a month’s pay to have Paddy back,” said one of the mourners. “I’ve had dogs, but never one with the brains Paddy had.”

In 1945,  donations were raised to erect a memorial fountain in his honor on Queen’s Wharf.  Using several granite stones salvaged from London’s first Waterloo Bridge, the memorial includes a good likeness of Paddy above the drinking fountain, and two drinking bowls for dogs at ground level.  A life size statue of Paddy also stands in the Queens Wharf Museum, a popular site with visitors. Each year close to the anniversary of his death, the museum renews Paddy’s registration with a Wellington City Council animal control officer in attendance for the ceremony, an ongoing commitment to keep Paddy’s memory alive.